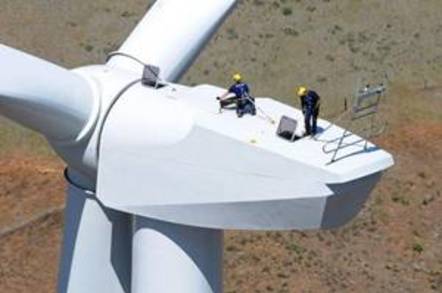 Microsoft has decided to acquire the entire output of a wind farm.

Microsoft says the farm in question is the “Keechi Wind project, a 110 MW wind facility 70 miles northwest of Ft. Worth, Texas, near the town of Jacksboro. The wind farm is on the same electric grid that powers our datacenter in San Antonio.”

“By purchasing wind,” the post continues, “we will reduce the overall amount of emissions associated with operating Microsoft facilities in this region and hopefully spur additional investment in renewable energy in Texas.”

The wind farm won't come online until 2014 and will eventually comprise 55 turbines that Microsoft is keen to point out will be made in the US of A.

Powering data centres with renewable energy is becoming very fashionable. Google's doing it in Oklahoma and Apple's decided the sun shines out its bottom line, inasmuch as its newest bit barn will be entirely solar-powered. Facebook chose Iowa for a new bit barn because that state is also full of windy electricity operators.

That trend looks likely to continue, as Microsoft's announcement of the deal says it will be the company's “first long-term power purchase agreement” and “will certainly not be our last”. ®