When viral videos had IMPACT 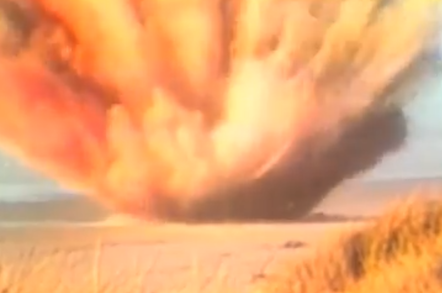 Obituary The internet is mourning the sad death of George Thomas Thornton, the man who gained immortal fame for blowing up a dead whale on TV and so created what was probably the first truly viral video.

The video of the infamous exploding whale.

Thornton became famous when a video showing his rather ill-advised decision to get rid of a stinking whale carcass with dynamite showed up on the internet and became an early hit. The exploding whale, instead of landing in the water as planned, is shown showering spectators, the beach and nearby parked cars with blubber and whale bits.

Thornton, who was a highway engineer, was landed with the job of getting rid of a dead whale back in 1970, when the Highway Division had jurisdiction over the beaches, according to the Associated Press. He figured that if the whale was towed out to sea, it could just wash back up again. Neither could they bury it on the beach as they wouldn't be able to get it deep enough to guarantee that the waves wouldn't just uncover it, so he decided to blow it up.

After consulting with the Navy and other munitions experts, Thornton and his crew set up dynamite on the landward side of the giant mammal, hoping to blow it up and out towards the sea. Instead, as seen in the video news report, spectators and reporters around a quarter of a mile away were covered in whale goo, while one massive chunk flattened the roof of a car.

The video was posted on a bulletin board in the 90s. Outraged viewers phoned in to the Oregon Department of Transportation to complain, not realising that the incident had happened twenty years earlier. The video has endured in cyberspace, getting uploaded to YouTube and ending up with its own website at theexplodingwhale.com.

These days, beached whales that can't be saved tend to be killed by lethal injection, necropsied and buried in the sand.

George Thomas Thornton died last Sunday at the age of 84. ®

Roundup It's panto season in this week's Microsoft roundup

Ninefold fires back at AWS with US launch