Thought no one saw you buy entire cake, eat it in the car? 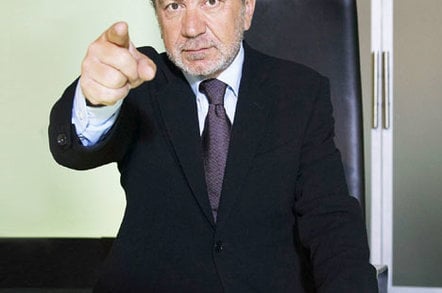 A division of Lord Alan Sugar's firm has launched a surveillance campaign which will see shoppers' faces scanned at hundreds of Tesco petrol stations.

Amscreen, one of Lord Sugar's firms, has installed the OptimEyes advertising system in 450 Tesco filling stations around the nation.

These devices contain facial recog technology able to detect the age and sex of customers, before beaming specially tailored advertisements at them. This means that if suddenly a number of women stop for petrol, for example, they could be shown advertisements for a women's fashion brand.

Once Big Beardie has scanned his targets, adverts will then play on a 100-second loop.

Simon Sugar, Alan's son and Amscreen CEO, said: "Yes, it’s like something out of Minority Report but this could change the face of British retail.

"Our plans are to expand the screens into as many supermarkets as possible.

"The OptimEyes does not store images or recognise people but just works out gender and sorts customers into one of three age brackets."

Tesco’s Peter Cattell said the technology was "the perfect means for us to enhance the customer shopping experience".

"It can be extremely useful and timely for our customers," he continued.

However, not everyone likes the thought of being spied upon.

Nick Pickles of Big Brother Watch issued a statement which read: "The race is on for retailers to gather as much information about us as possible, as personalised as possible.

"The very intrusive nature of this technology lays bare the lengths to which some companies are willing to go and how supermarkets see people as there to be tracked." ®