Switzerland to set up 'Swiss cloud' free of NSA, GCHQ snooping (it hopes) 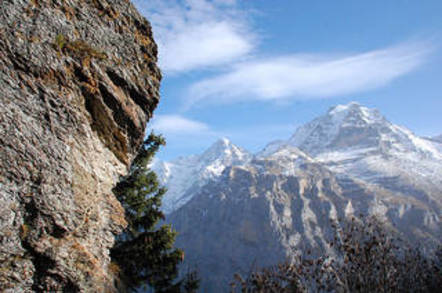 Swisscom, the Swiss telco that's majority owned by its government, will set up a "Swiss cloud" hosted entirely in the land of cuckoo clocks and fine chocolate – and try to make the service impervious to malware and uninvited spooks.

Companies providing secure communications, such as Silent Circle, already use Swiss data centers because the country has very tight data privacy laws. And surveillance can only take place after prosecutors secure a court order, as opposed to the secret clearances issued in the US.

"Data protection and privacy is a long tradition in Switzerland, and that's why it's pretty difficult to get to something," Swisscom's head of IT services Andreas Koenig told Reuters. "But if legal requirements are there and we are asked by the judge to obtain or deliver certain information then we would obviously have to comply with it."

Koenig insisted that introducing the Swiss cloud was less about addressing concerns over foreign spying and more to do with providing a local service that could be fast and secure, but acknowledged fear of surveillance and the existence of Switzerland's tight privacy policies may make the service attractive to those worried about the safety of their cloud data.

That includes the Swiss government. Last week the Swiss newspaper Basler Zeitung reported that the nation's administration was increasingly concerned about the extent of state-sponsored spying on cloud data. Much of the country's revenue comes from its banking sector and with an estimated $2 trillion stored by the Gnomes of Zurich, Swiss servers are bound to be of interest to snoopers and scammers.

The Swisscom cloud will use HTML5 for its user interface, and will host all its data within Swiss borders. While designed for domestic customers, Koenig said that the service could appeal to others who want their data to be as secure as their savings.

"If you are a provider in a cloud environment you need to apply the highest standards of security you can get," he explained. "It's like opening a data tunnel from the server to your screen and then displaying the data on your screen. That makes it pretty, pretty difficult for anyone to see what's there."

Swisscom aims to get about three quarters of its data, estimated to be between 200 and 300 petabytes, on its cloud by 2016, but it gave no more details on how fast the service could be rolled out to others. ®