Is it TRUE what they say about the 'Moto G'? We FIND OUT on the 13th

Internet rumours conflict with each other - shocker 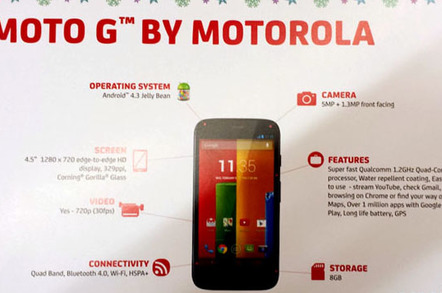 Google-owned Motorola’s rumoured lower-cost alternative to the top-of-the-range Moto X looks set to arrive in time for Santa to drop it down a few of the world’s chimneys this year.

A suitably seasonal promotion card scanned and then posted on GSM Arena by a punter who claims to have found a batch about to be sent to Phones4u shops reveals the "Moto G" will feature a four-core 1.2GHz Qualcomm SoC, 8GB of SD card storage and a 5MP main camera. 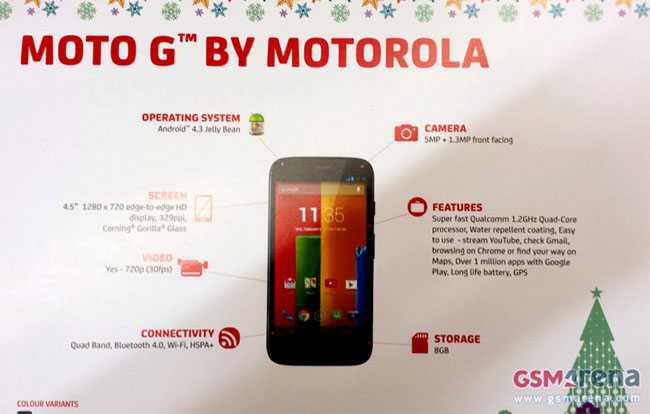 The usual connectivity options are present and correct - though the G will be limited to HSPA+ 3G rather than 4G LTE cellular comms.

Curiously, EVLeaks recently claimed the G will feature a 4.7-inch display of the same resolution and incorporate not only an 8MP camera but also a 1.5GHz quad-core chip, though it too is made by Qualcomm, claim the leakers.

EVLeaks’ accompanying picture, a photo of a Moto magazine ad or a flyer, doesn’t show much anything in the way of technical detail, just the G itself. The phone picture in the two sources’ snaps is identical, as is the typography and the Xmas iconography.

That suggests both are legit, but may be discussing different variants - possibly regional - of the same handset.

The Christmas theme of both flyers shows that the G will be out later this year - so we’ll discover which leak-site got it right then.

Bootnote
And we’ve just heard that Motorola will be unveiling the Moto G on 13 November, when ”we’ll be able to reveal a lot more about it”, a PR man said. ®