Helium-filled disks lift off: You can't keep these 6TB beasts down 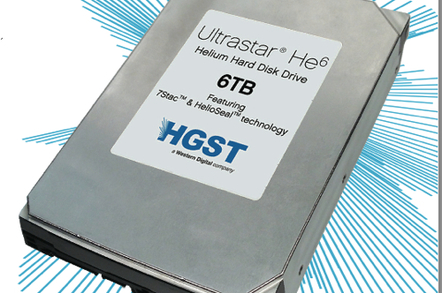 Instead of the platters spinning inside an air-filled enclosure they rotate inside one filled with helium gas, 14 per cent of the density of air. This has a much lower level of friction than air and so the drives need less power to push their platters around and there is less turbulence inside the enclosure, HGST says.

This means up to seven platters can be put inside the 3.5-inch drive enclosure instead of the usual five.

Helium tends to leak through seals and HGST has had to develop hermetic seal technology to stop this from happening. This means the He6 could be used in a liquid cooling scheme as the liquid cannot get into the drive and damage it. Current air-cooled drives are unsuitable as the cooling liquid could penetrate the drive.

A canned quotation from HGST's product marketing veep, Brendan Collins, said: “Our mainstream helium platform will serve as the future building block for new products and technologies moving forward. This is a huge feat." 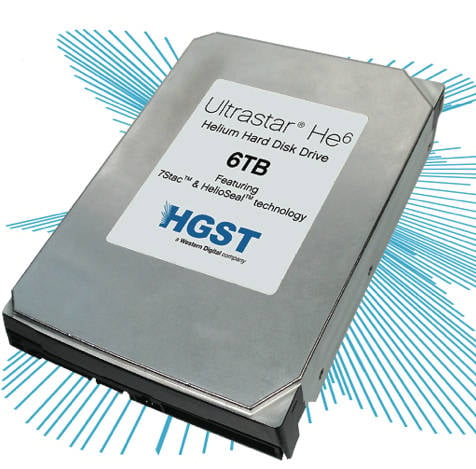 The HGST release stated: "HGST’s helium platform will serve as the main platform for new technologies like shingled magnetic recording (SMR) and heat-assisted magnetic recording (HAMR) where HGST will continue to push the HDD areal density envelope. The helium platform will also serve as the future building block for new, growing market segments such as cold storage, a space that HGST plans to address over the next couple of years."

The increase in the platter count increases the capacity of the drive, with a previously four-platter drive increasing its capacity by three-quarters if seven platters are used. A 4TB four-platter Cinemastar drive could become a 7TB seven-platter helium drive, and a five-platter 4TB MegaScale, spinning at 5,700rpm, could become a 5.6TB Helium MegaScale with seven platters – at least that’s the theory.

The main benefit is a lower per-GB total cost of ownership for high-density data centre applications. Getting back to the Ultrastar range, it currently maxes out with the 7K4000, a 4TB drive with five platters rotating at 7,200rpm and with a 6Gbit/s SATA interface. With the He6 having a 6TB capacity, there is capacity headroom here.

The Ultrastar He6 drive features:

If you are worried about helium gas inhalation, HGST says the drive “contains less helium than a balloon, so is perfectly safe.”

Customers such as Netflix, CERN and Huawei have been testing prototype drives. Olof Bärring, a CERN IT Department section leader, provided a quote: “We have tested the helium drive and it looks very promising: it surpassed our expectations on power, cooling and storage density requirements. We’re excited about the opportunity to qualify the HGST Ultrastar He6 hard drive in our environment.”

HGST is not revealing its spin speed - although current high-capacity Ultrastars spin at 7,200rpm – its cache size (it's 64MB in other Ultrastars), nor the sustained data-transfer rate.

The drive is available now, and has a five-year warranty. HP provided a supporting quote indicative of support for the drive. Grab a product summary here [PDF]. ®