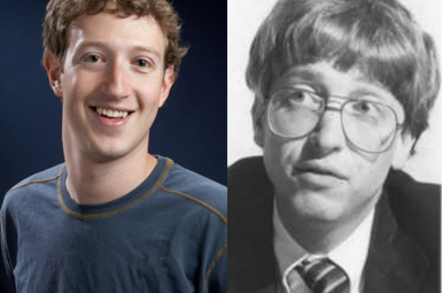 In August, Facebook supremo Zuckerberg published an extended screed [PDF] online in which he described the need to get everyone in the world online as "one of the most important things we all do in our lifetimes." At the time El Reg was somewhat cynical about the scheme, and it seems we're not alone in our assessment of the behoodied one's plans.

"As a priority? It's a joke," Gates told CNBC in an interview. "I certainly love the IT thing. But when we want to improve lives, you've got to deal with more basic things like child survival, child nutrition.

The remarks – which CNBC reports Gates' PR handlers tried to get stricken from the interview – aren't the first time the Microsoft chairman has clashed with some of the more fanciful schemes put forward by some in the technology industry to save the world.

Gates was also scathing in his assessment of Google's dream to bring the internet to the world's unconnected population by floating hundreds of weather balloons equipped with solar-powered radios – a scheme dubbed Google Loon by the Chocolate Factory, apparently not in the spirit of irony.

"When you're dying of malaria, I suppose you'll look up and see that balloon, and I'm not sure how it'll help you," Gates observed at the time. "When a kid gets diarrhea, no, there's no website that relieves that."

There's no harm in using a technological mindset to sort out the world's problems, Gates said in the CNBC chat, but you had to look at fundamentals. He details how a better understanding of science and technology issues was helping his charitable foundation's attempts to eradicate polio and malaria, along with the estimated $4bn a year he contributes to such efforts.

Gates described how, in the case of polio, fixing the problem came in understanding how to drive the cost of vaccines down to 50 cents per dose and finding the right equipment to keep the serum cool enough not to spoil.

Applying these lessons, and using his position as the world's richest man to sway over supporters, has helped eradicate polio in India and knock it back in most of the rest of the world – rather than equipping data centers to process Facebook cat videos or launching floating 3G connections.

"Fine, go to those Bangalore Infosys centers, but just for the hell of it go three miles aside and go look at the guy living with no toilet, no running water," Gates said. "The world is not flat and PCs are not, in the hierarchy of human needs, in the first five rungs." ®