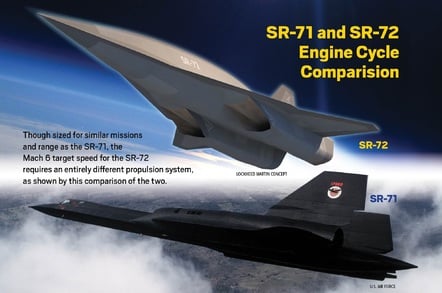 Pics The famous SR-71 Blackbird was put out to pasture over a decade ago – but the legendary Skunk Works aviation wizards that built it have been showing off a replacement that can travel twice as fast and it could be in the skies within a decade.

The SR-72 will be unmanned, saving a lot of the weight needed to keep the two fleshy pilots of its predecessor alive and functional, and will be able to cruise at high speeds for aerial reconnaissance. It is also being designed to have offensive capabilities that would make it the ultimate in fast bombers.

The new aircraft uses two types of engine to fly; a beefed-up turbojet to take off and reach speeds of up to Mach 4, whereupon a scramjet takes over and boosts the aircraft to a cruising speed of Mach 6 - that's more than two kilometers per second. Skunk Works told Aviation Week that the craft isn't particularly stealthy, but at that speed it doesn't need to be.

"Speed is the new stealth," said Al Romig, Skunk Works engineering and advanced systems vice president. With the SR-72 traveling at Mach 6 there's so little time between the detection of the aircraft and its arrival at the target that there's no time to take cover, Skunk Works said. Such speed would also allow it to outrun conventional missiles. 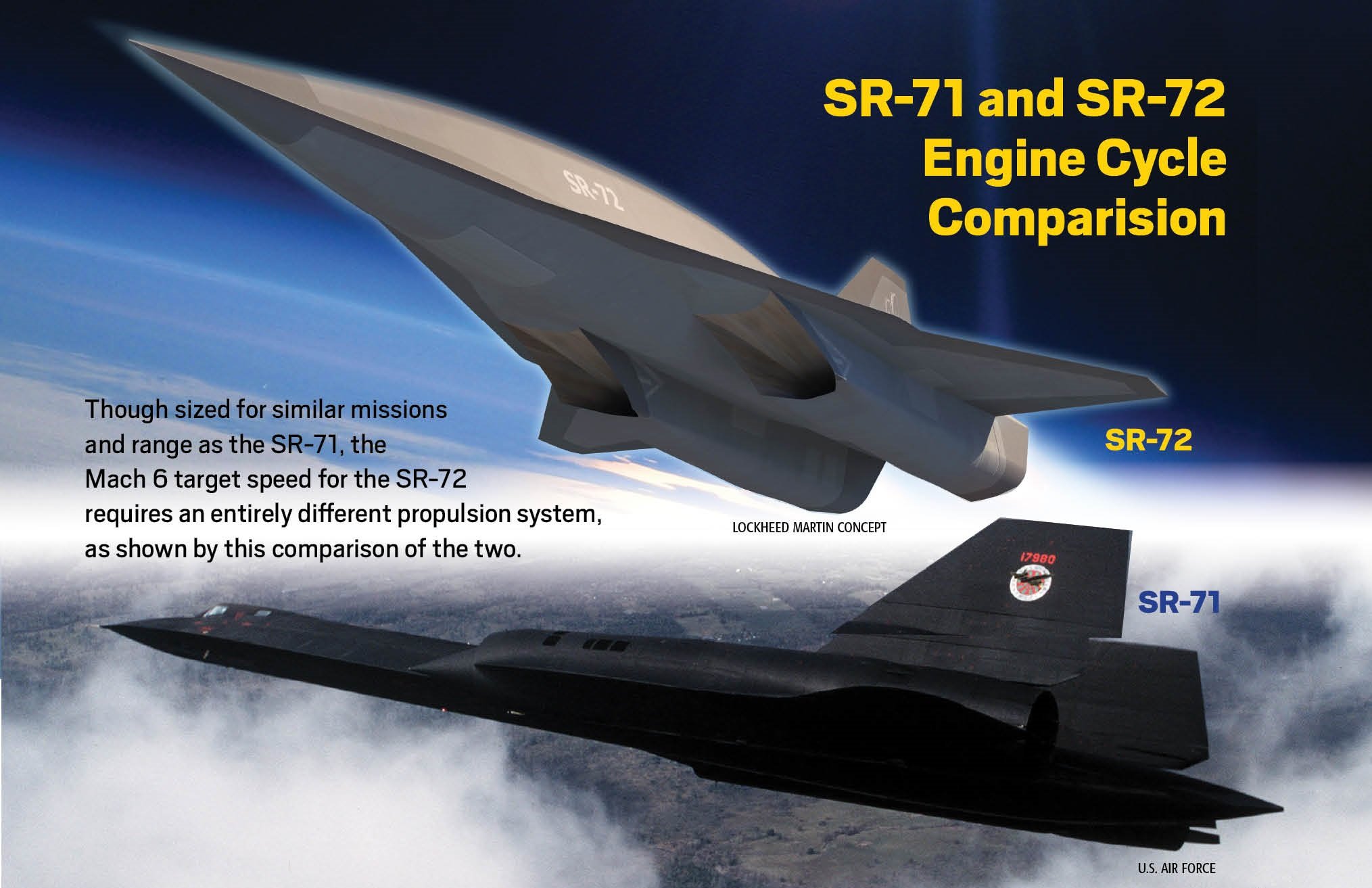 The US has been working on a successor to the SR-71 for years, including the Blackswift - a proposed hypersonic aircraft which had its funding removed in 2008. Brad Leland, portfolio manager for air-breathing hypersonic technologies at Skunk Works said the SR-72 wasn't Blackswift, but that they had got a lot of vital information from that defunct program.

Blackswift gave "several key accomplishments which we didn't advertise too much," he said. "It produced an aircraft configuration that could controllably take off, accelerate through subsonic, supersonic, transonic and hypersonic speeds. It was controllable and kept the pointy end forward."

The next stage was to find a way of bridging the "thrust gap" in hypersonic flight. Conventional production turbine engines can only reach about Mach 3, and the aircraft needs to be going faster than that for a scramjet to work. Boeing's X-51A scramjet has successfully reached high Mach numbers, but only after being boosted by a rocket motor, which wouldn't be efficient for an aircraft to use.

The Skunk Works team wouldn’t say how this gap has been bridged, but it appears they have developed a production turbine engine that can reach the required speeds for scramjet activation. The turbine and scramjet share a common air intake, and when the necessary speed is reached the turbine shuts down and the scramjet takes over and powers up to allow Mach 6 flight. 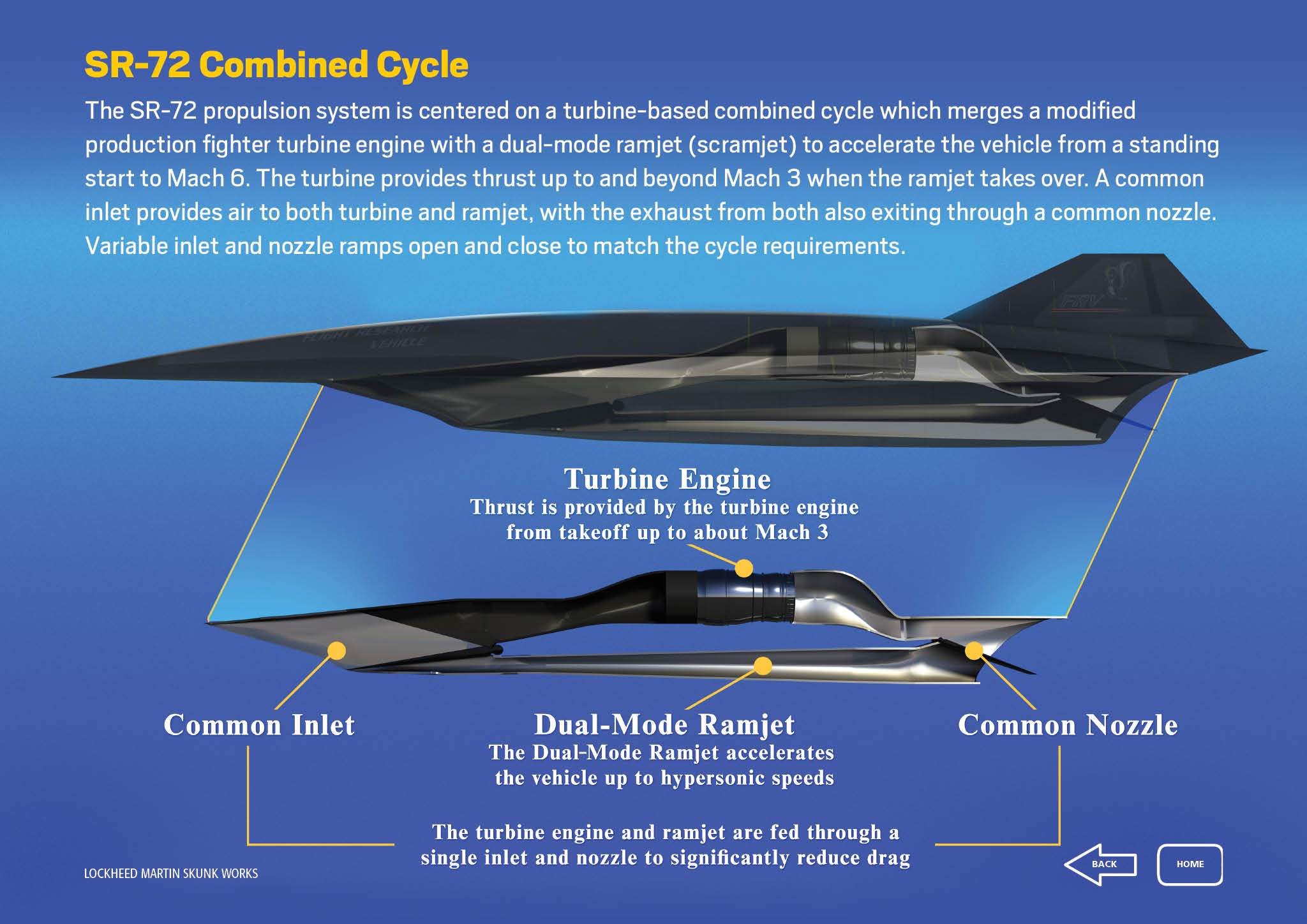 "We could be ready to do a demonstration aircraft in 2018. That would be the beginning of building and running complete critical demonstrations," said Leland. "As of now, there are no technologies to be invented. We are ready to proceed—the only thing holding us back is the perception that [hypersonics] is always expensive, large and exotic."

The first demonstrator should be about the size of a F-22 aircraft capable of flying at Mach 6 for several minutes, and should be ready for flight by 2023. This would allow the team to check that the aircraft is capable of making it to those speeds while remaining stable, maneuverable, and in one piece.

Assuming all goes to plan, the Skunk Works team will build a full-sized SR-72 that will be capable of operations by 2030. This should be about the same size as the SR-71, but with twice the speed and about the same range.

There's obviously a lot that can go wrong in the meantime. At Mach 6 the aircraft will heat up considerably and also stretch out. The SR-71 was notorious for leaking fuel while on the ground because it was designed with corrugated skin that would expand and smooth out at high speeds; at double the velocity these issues could become much more serious.

Nevertheless Skunk Works must be pretty sure it has the answers. The company is so discreet it would make a Trappist monk look loquacious, and going public in this way is a sign that the firm is confident in its calculations. ®