Can 50,000 match simulations turn you into a winner? 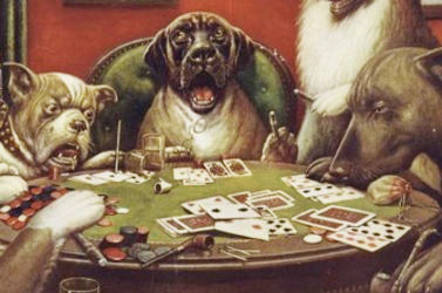 HPC blog Have you ever wanted to lay a bet down on the Las Vegas sports books? Or take a bundle of money from the suckers in your office's Final Four betting pool? Is it possible to win sports bets consistently over the long haul?

According to the guys at PredictionMachine.com, the answer is yes. Their secret weapon? Numbers, baby – it’s all in the numbers. They’ve built a formidable prediction tool with their Predictalator, the name they’ve given their methodology and algorithms.

What’s interesting about their approach is that they aren’t looking at historical trends and trying to quantify their hunches. They’re taking a highly scientific and quantitative approach with sophisticated models and lots of simulations. In fact, their tool simulates each and every game 50,000 times before making a pick.

Over the last three years, the company's founders claim, Predictalator has scored wins on better than 70 per cent of their straight-up bets, and better than 50 per cent vs the Vegas spread.

This is a combined record on all of the professional and college football, basketball, pro hockey, and Major League Baseball games they’ve picked over the last three years, they say.

My pal Rich Brueckner and I had a chance to interview PredictionMachine.com founder Paul Bessire as part of our Radio Free HPC podcast a few weeks ago. In the programme, Paul discusses the genesis of the Predictalator and how he turned his master’s degree in quantitative analysis into a full-time business.

Along the way, we talk about what’s involved in analysing sports and how they arrived at their winning formula. It’s interesting listening for anyone who has ever been curious about applying scientific methodology to sports.

Paul also gives us some perspective on how technology has advanced over the past few years. When he first started, it would take 30 minutes to simulate one NFL season (267 games) "only" 50 times – which was, he said, far too small a sample size and yielded terrible results.

Today he can run a complete NFL season in a mere eight seconds using only one server, which is a pretty incredible speed-up in just the last three or four years. Some of this improvement is because of better code on his part, but much of it is due to faster technology – particularly when it comes to generating random numbers and raw compute power.

This speed is what enables their latest, and perhaps coolest, feature. Their Live ScoreCaster app tracks the action in live games and instantly updates their projections as game conditions change. For example, after every play in a football game, their server simulates the game 50,000 times and then publishes a new predicted outcome. This free app gives you the analytic justification to declare, “This idiot just lost us the game!” with complete authority.

Check out the podcast here – it’s an entertaining conversation about how analytics can be used for fun and profit. And good luck with the bookies… ®

Burkina Faso the most expensive, UK in top third cheapest

Two countries divided by a common... approach to dealing with COVID-19

Better update if you leave your laptop unattended in public...

Are you a bit out of touch? Come and shop here