Could Doctor Who really bump into human space dwellers?

There are a few things we'll need to sort out first

"All of time and space; everywhere and anywhere; every star that ever was. Where do you want to start?"

Virgin Galactic chief exec George Whitesides reckons the first hurdle just happens to be one his company is helping to work on - rocketships.

"The number one thing that we need to be working on is reusable access to space and the reason for that is that makes everything cheaper," he said.

"Basically, propulsion technologies that are suitable for putting things into orbit many times in a row rather than throwing it away after every flight, which is sort of what we do now - which is like throwing away a 747 every time we cross the Atlantic." 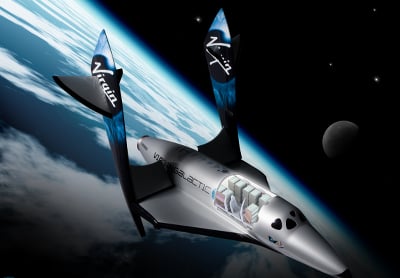 "And that entails a whole range of different things like reusable engines, highly reusable materials that can be used for thermal protection systems and high efficiency rocket propulsion techniques. Or any kind of propulsion actually - it could be a combination of things where you could use a scramjet or a ramjet as a sort of intermediary stage for the rocket engine," he added.

Whitesides and Virgin Galactic don't, of course, have even so much as a basic ramjet on hand - let alone a tricky scramjet. Their "SpaceShipTwo" rocket planes will take off carried by conventional jet "motherships", which will release them at high altitude where they will fire up their rockets to achieve great heights. But the Virgin ships are not really space ships at all: they won't be able to achieve orbit. They aren't going to get anyone even to a space station, let alone to Mars or worlds still further away.

So what might get us out into space for real?

There are a number of ways that realspace ships could be powered: these include chemical rockets, ion thrusters that use electromagnetism to accelerate charged particles and solar sails. These are all capable of travel within the Solar System, though we're talking about journey times lasting years in most cases. One exception is the VASIMR plasma drive, which could get people to Mars in just a month - though it would need to be powered by a hefty nuclear powerplant rather than feeble solar cells to achieve this.

Beyond this, we're starting to get into science fiction. This includes pulsed plasma - most likely generated by exploding nuclear weapons behind the craft so it can ride the shockwaves - fusion rockets and such like. These might permit humans to get around our own solar system on practical timescales with practical amounts of radiation protection, and they don't violate the laws of physics: though they might violate the laws of politics and economics.

To get to other solar systems on human timescales, we'll need some kind of warp or hyper drive.

Assume propulsion has been sorted out, crew and craft would also need protection from radiation. Tito's Martian mission is looking for a couple over childbearing age for that very reason, to at least mitigate some of the potential issues from exposure. But even still, "unless you're really willing to go to Mars and die five years later, you have to have some sort of protection", Tumlinson said.

Current manned missions stay well inside the Van Allen radiation belts, the two doughnut-shaped regions of high-energy electrons and ions trapped in the Earth's magnetic field that protect the planet and its inhabitants. Full-on space travel would mean leaving this region and dealing not only with general background cosmic radiation but also with solar flares.

The only missions ever to leave the Van Allens' protection so far were the Apollo missions to the Moon, which made only brief and carefully-timed excursions into danger. A serious solar event during an Apollo mission could have seen the astronauts suffer major or even fatal radiation doses.

The thorny problem is that the the shielding that would be required to keep people safe in space is so massive, the ships wouldn't have the propulsion to get off the ground. One study by researchers at the University of Rochester Medical Center showed that not only would prolonged exposure to space radiation increase cancer risk, and cause cardiovascular problems and musculoskeletal issues, it would also lead to degeneration of the brain. One of the researchers, Dr Michael O'Banion, said that to protect against the worst of the radiation "one would have to essentially wrap a spacecraft in a six-foot block of lead or concrete".

So if humans want to travel through deep space, boffins will need to come up with some new process or material that can help. Whitesides points out that some scientists are working on the idea of surrounding the craft with large volumes of water as a form of shield, while others are looking at using a nuclear reactor to create a forcefield.

But even if a perfect solution isn't found, people may still be willing to go ahead for the chance to be among the first in space.

Next page: Just an aspect of risk
Page:
Tips and corrections
74 Comments