Alien planet is just like EARTH - except for ONE tiny detail

Doomed, scorchio planet is far too close to its sun 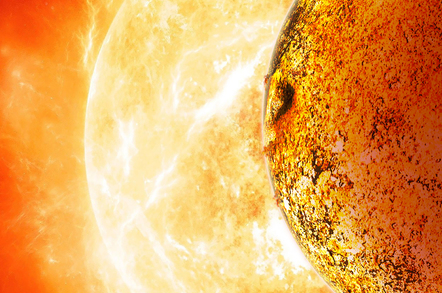 Four hundred light-years away in the constellation Cygnus there lies a G-type star very much like our own Sun. Orbiting it is a world scientists believe is very similar to Earth in both size and composition.

This faraway planet, discovered by the Kepler space telescope and so dubbed Kepler-78b, is not a potential second home for humanity (or alien life along the same general lines as that of Earth). That's because it orbits its sun at a distance of just a million miles, rather than the 93 million that lie between us and Sol. And it's this which has top astro-boffins around the world baffled.

"This planet is a complete mystery," says David Latham, a top brainbox at the Harvard-Smithsonian Center for Astrophysics. "We don't know how it formed or how it got to where it is today. What we do know is that it's not going to last forever."

Kepler-78b is especially Earthlike as exoplanets go: it's the first known Earth-sized planet with an Earth-like density. Kepler-78b is about 20 percent larger than the Earth, with a diameter of 9,200 miles, and weighs almost twice as much. As a result it has a density similar to Earth's, which suggests an Earth-like composition of iron and rock.

But the anomalous, burning hot planet hasn't got much of a future. The Harvard-Smithsonian astro boffins tell us:

Kepler-78b is a doomed world. Gravitational tides will draw it even closer to its star. Eventually it will move so close that the star's gravity will rip the world apart. Theorists predict that Kepler-78b will vanish within three billion years.

Perhaps more intriguingly, they say that if there had ever been a Kepler-78b in our solar system - and apparently this is quite possible - such a second Earth would have vanished long ago, leaving no trace for us to find today.