Fancy a $50 piece of clear plastic? Step right in 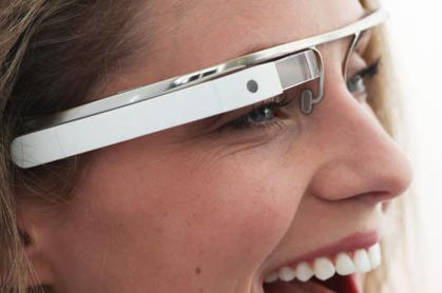 Continuing its renewed push for its Glass camera-goggles, Google has quietly launched an online store to sell accessories for the wearable computers.

The site was first spotted by Marketing Land on Wednesday after links were shared on a private forum for members of Google's Glass Explorer beta program.

The store itself is only accessible by Glass Explorer members. Visitors who aren't recognized as owning one of the $1,500 headsets are redirected to a page where they can sign up to receive more information, or optionally enter an invite code to sign up for the program.

If you are in the club, however, you'll be shown a selection of add-ons that you can order, although so far most of the stuff is still marked as being out of stock, and many of the items are listed as only being compatible with the new version of Glass, purchased after October 28.

The prices of the items should raise a few eyebrows, too. About those new monaural earbuds, designed to replace the bone conduction sound system of the original Glass headsets; if you lose yours, replacing it will apparently set you back $50. 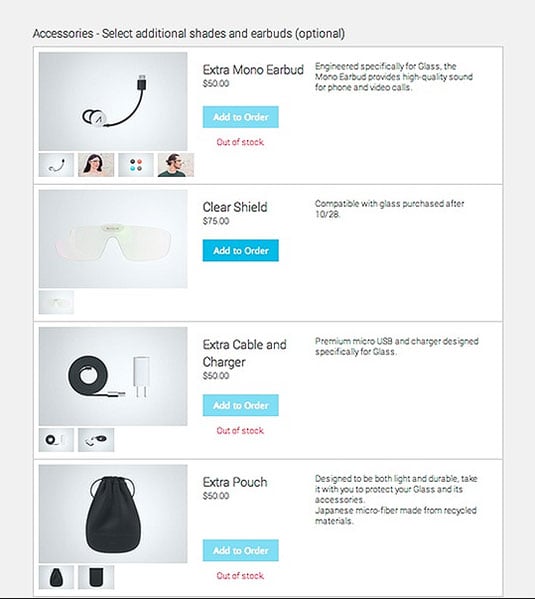 If you lose the accessories that came with your Glass, keep your wallet handy (Source: Marketing Land)

The same goes for a replacement USB cable and charger "designed specifically for Glass," or a replacement bag to put your specs in. Each costs $50 – although, to be fair, the bag is sewn out of "Japanese micro-fiber made from recycled materials."

A "clear shield" – otherwise known as transparent lenses that you can hang off the Glass frame – will run you even more, at $75. According to support materials on Google's site, the company has "partnered with Maui Jim and Zeal Optics to include a sunglass shade with every new Glass," but replacements certainly aren't cheap.

Google has not commented on the store, and it's not clear when it will be up and running in earnest. But Google's support site says that people who can't find a particular accessory in the Glass shop should "check back again in a few days."

In addition, Google has said that people who receive invites to join the Glass Explorer program will be able to order their headsets online. It hasn't said exactly when those sales will open, but a note on the Glass team's Google+ page says the ad giant will email Glass Explorer participants with information on how to send out the invites "soon." ®