Vultures exploit dateline, get preview of the Fifth Coming 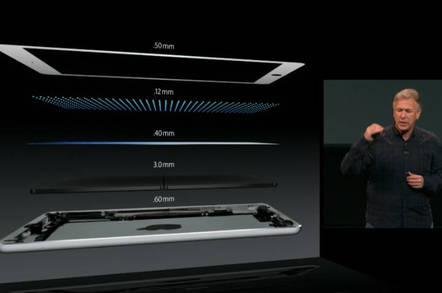 Apple's iPad Air is beautifully light, so much so you can handle it with one hand.

The Reg makes this assertion after sending operatives from its Sydney office to a nearby Jobsian store to take advantage of timezone accidents, and thereby bring you news of the new fondleslab before it goes on sale elsewhere.

Yes, we know, less critical media outlets than this one have already been handed the iPad Air to play with. Apple doesn't like EL Reg enough to offer us up a preview, leaving us in the retail swill with ... erm … readers like you!

We're digging a hole there, so let's get back to the appraisal. In your correspondent's experience, full-sized iPads are heavy enough that it takes two hands to heft them and they're most-easily used when rested on something. Our initial reaction when picking up a 128GB Wi-Fi-only Air was that it was surprisingly light, so light in fact that if one were reading or watching a film on the marvelously crisp and smooth-scrolling screen, it would be possible to hold the device in one hand.

That would leave the other free to reach into one's pants … an action we mention because after our brief in-store experience with the Air we think that's where a lot of people will want to go in order to get out their wallets.

We suggest the likelihood of hand-in-pants action because the Air is a lovely tablet. The slightly squarer edges make it easier to hold, iOS 7 fits nicely into the bigger and more pixel dense screen and the color schemes add a certain something to the overall package. That it is very, very light will make it more pleasant to use.

One worrying thing we noticed was vibrations: with audio turned up to full when playing music or video the Air shook subtly, almost throbbing during loud moments. And no, we weren't listening to heavy metal: the first familiar track on the in-store Air we found was Billy Joel's Piano Man. Even that mawkish ballad gave the Air enough of a shake to set things jiggling a little.

Beyond the impressions detailed above, the Air also suffers from some “is that all there is-itis,” because despite representing another triumph of engineering it's not a million miles from the experience delivered by the original iPad, and plenty of imitators since. Reg readers have pointed out we'd never say the same about laptop computers; an older product with more contenders all cleaving to a very similar script.

That criticism is fair, save for Apple's insistence it is a dynamic innovator that makes markets like no other. As we reported earlier, Apple's market share in tablets is tumbling. The Air is a very worthy heir, but punters are clearly finding alternatives compelling. Many of those alternatives offer upgradable and/or removable storage and a more open software ecosystem.

Canalys last week warned Apple that its focus on premium products and markets put it at risk of being unable to follow a growing population of down-market buyers, which is where things inevitably head.

It will take a while before devices to compare with the Air reach the bargain basement. Until they do, it will likely remain the market leader on paper, if not on the scoreboard of sales. ®