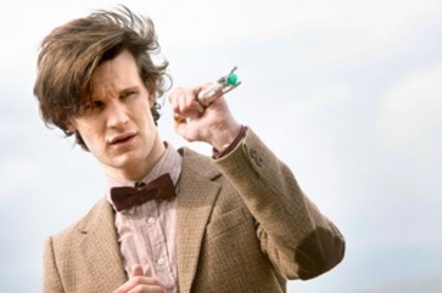 Doctor Who @ 50 Fifty years ago in November – on November 23, to be precise – the BBC broadcast its first episode of Doctor Who. It was the start of what, in the world of JJ Abrams, we’d call “a franchise”.

In five decades the Doctor’s been played by 11 actors - even more thesps have played his companions.

While the names have changed, the Doctor hasn’t. To quote Tom Baker's Fourth Doctor: “You may be a doctor, but I’m THE doctor. The definite article, you might say.”

What’s the secret to the Doctor’s power?

Great writing from, among others, Hitchhikers’ Guide to the Galaxy man Douglas Adams and graphic novelist Neil Gaiman.

Every hero has a nemesis and the Doctor has plenty – robots, cyborgs, madmen and disembodied and vengeful alien forces bent on galactic destruction.

There are the assistants, too – some of whom have maintained a somewhat edgy and suggestive relationship with the Doctor over the years.

All this has seen the Doctor go beyond TV with merchandising, live shows and a shameless BBC TV "event" to unveil the next actor to play the Time Lord.

Not that the Doctor’s survival has been assured. Indeed, it’s a miracle he’s survived this long - not that you’d guess it from the BBC’s hagiographic coverage.

That first episode in 1963 was eclipsed by the assassination of US president John F Kennedy in Dallas, Texas. So worried were the Beeb by its viewers’ potential inability to process more than one televisual event they re-broadcast the pilot. Then the BBC ended the Doctor’s run in 1989 and – apart from his brief appearance in a 1996 film – it wasn’t until 2005 when he returned with the power trio of Russell T Davies, Christopher Eccleston and Billie Piper to a new generation.

With the 50th anniversary of Register readers' favourite Time Lord coming up, we're marking the occasion with a series of special features for the next month. Among the line up:

So put a bucket on your head, grab the nearest toiler plunger and let forth the cry: EXTERMINATE! EXTERMINATE! ®