But hey, at least sport channel's off to a 'confident start' – Patterson 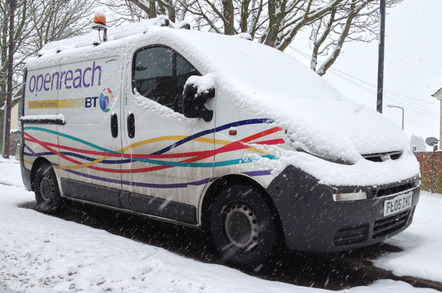 BT's freshly installed chief executive Gavin Patterson told the City today that revenue had edged up to £4.49bn, while profit before tax fell 10 per cent to £499m during the company's second quarter.

In a cautious-sounding statement, Patterson said that the three months ended 30 September had produced "good results" for BT.

He added: "This has been our strongest ever quarter for fibre take-up with Openreach net connections up 70 per cent."

The telecoms giant said that its predominantly fibre-to-the-cabinet network (feeding the cabling into properties over a copper line) had now passed more than 17 million premises in Blighty. Of these 17 million premises, about 7 million subscribers had opted for BT's own product, while the rest opted for the products of rival ISPs that use the fibre.

BT Sport, which launched in August, now has two million of the company's subscribers signed up to it. Patterson said the TV channel had "made a confident start".

The one-time national telco saw mixed results with its business divisions during the three-month period, reporting either flat or falling sales.

Its Global Services wing took the biggest knock, with revenue down four per cent to £1.69bn from £1.75bn during the same quarter a year ago.

BT's Wholesale divisions reported a conservative climb in sales, while Openreach's revenue performance was slightly worse off than in the company's 2012 second quarter. The company blamed regulatory price changes, which had had a £70m impact on that arm of the business, where sales were down to £1.27bn.

The telco's retail division was the star of the show - with revenue up 2 per cent to £1.84bn helped along by broadband and TV sales. ®