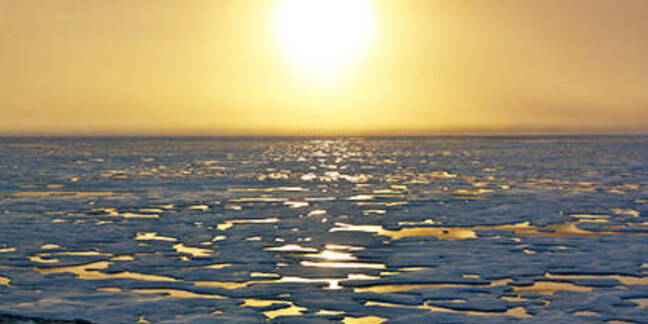 A recent study has shown that over the past 100 years the average summer temperatures in the Eastern Canadian Arctic have been toastier than at any time for at least the past 44,000 years, and perhaps for as long as 120,000 years.

"This study really says the warming we are seeing is outside any kind of known natural variability, and it has to be due to increased greenhouse gases in the atmosphere," the study's lead, geological sciences professor Gifford Miller of the University of Colorado Boulder, said in a press release.

The study's results are detailed in a peer-reviewed paper, "Unprecedented recent summer warmth in Arctic Canada", in Geophysical Research Letters, a journal published by the American Geophysical Union.

"Our results indicate that anthropogenic increases in greenhouse gases have led to unprecedented regional warmth," the abstract for that paper concludes.

Miller and his team used radiocarbon dating to date 145 clumps of dead moss that have emerged as the ice melted in four different previously ice-bound areas of highlands of Baffin Island, finding that they were last exposed to the elements between 44,000 to 51,000 years ago.

"Since radiocarbon dating is only accurate to about 50,000 years and because Earth's geological record shows it was in a glaciation stage prior to that time, the indications are that Canadian Arctic temperatures today have not been matched or exceeded for roughly 120,000 years," is Miller's conclusion, according to the release.

Using data from ice cores recovered during previous research at the nearby Greenland Ice Sheet, Miller and his team concluded that the most recent time when Arctic summer temperatures were "plausibly" as warm as they are currently is about 120,000 years ago – which is about the same time as the end of the Earth's previous interglacial period.

"We suggest this is the most likely age of these samples," Miller said.

The study provides evidence that the current temperatures in the studied regions are now warmer than they were during the Early Holocene period – the Holocene being the period in which we are now in, and which began about 17,000 years ago at the end of the Earth's last glaciation event.

Of interest, according to Miller, is that the amount of the Sun's energy that reached the Northern Hemisphere during the Early Holocene was about 9 per cent greater than today.

The study also showed that average summer temperature in the area studied had cooled by about 5°F (2.8°C) from about 5,000 years ago to about 100 years ago – a range that included the cooling period known as the Little Ice Age, which ran from 1275 to 1900, give or take a few years, and which Miller says sediment-core studies indicate was triggered by both sun-blocking aerosols from tropical volcanic activity, along with a decrease in solar radiation.

As the Little Ice Age came to a close, the cooling reversed itself, a warming trend that started accelerating about 40 years ago. "Although the Arctic has been warming since about 1900, the most significant warming in the Baffin Island region didn't really start until the 1970s," Miller said.

"And it is really in the past 20 years that the warming signal from that region has been just stunning," he added, noting that other University of Colorado Boulder studies in Greenland show that ice-sheet temperatures have risen by 7°F (3.9°C) since 1991.

"The key piece here is just how unprecedented the warming of Arctic Canada is," Miller said. ®