Get your IT kit orrrrrff 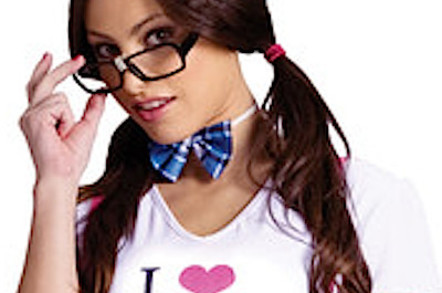 A San Francisco tech hub is standing firm after coming under fire for its plans to hold a "hackers and hookers" Halloween party. The group said it would hold the themed party as planned.

Although the festival formerly known as All Hallows' Eve is known as a time when those of us with exhibitionistic tendencies – mostly women – conspire to wear as little as decency allows, the sensitivity around the tech world's gender balance caused a Twitter storm around the event.

The invite to the bash at the Hacker Hideout in San Francisco shows a Japanese-style schoolgirl peering over her specs, wearing a dress that shows off her upper thighs and a t-shirt which says "I love geeks". There is no hacker on the flyer.

After a Twitter pasting, the organisers issued this apology:

It has come to our intention [sic] that a recent event being hosted in our facilitates [sic] has caused some upset and offended some people out there. We would like to start by saying it was not our intention to offend or upset anyone, but it can be hard to please the whole world and the different cultures, values and beliefs that exists [sic].

Having said that, it was for a Halloween pre-party and it was all in the spirit of good fun and humor. However, it seems that some disgruntled residents who decided to take advantage of the office space provided, and asked to leave [sic], and others posting who failed to disclosed [sic] they are competitors with their own work spaces around SF, are hoping [sic] to blow the event and its intentions out of proportion.

The posts made and deleted were from such people mentioned above or their friends, so no we are not going leave up biased and false statements about our intentions or about our company.

Hacker Hideout advertises itself as a "member-based community center in San Francisco for thinkers and builders" [our emphasis], perhaps not having fully thought it through.

Organiser Alexandra Hunter told HuffPo that the company was made up of an almost even number of men and women, making the point that they "were not trying to be brogrammers'."

"We are and like to think of our facility as a co-working space, micro incubator, socialecotechnological (yes we made this up) think-tank, and social event center for hackers, builders, designers and shakers of San Francisco."

What sort of shakers are we talking about here? ®