Where IS thy sting? Oh, I've eaten it, greedy me 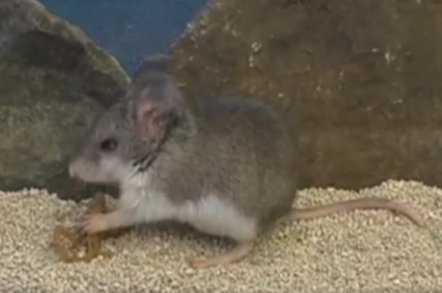 Video Top scientists have discovered grasshopper mice feel no pain when they are stung in the face by scorpions: they simply carry on gobbling up the fearsome poisonous arachnids.

The mighty mouse, native to the southwestern US, has managed to take the toxin, which is lethal to other animals, and turn it into an analgesic that numbs pain.

Michigan State University assistant professor of neuroscience and zoology Ashlee Rowe had already figured out that the mice weren't bothered by bark scorpion toxin, but didn't know why.

“This venom kills other mammals of similar size,” she said. “The grasshopper mouse has developed the evolutionary equivalent of martial arts to use the scorpions’ greatest strength against them.”

Rowe and her team scooped up a bunch of mice and scorpions from the desert to try to figure out why. They injected both the toxin and non-toxic saline solution into the mice's paws but found that the creatures reacted much more strongly to the solution, licking their paws to try to get rid of the sting.

"This seemed completely ridiculous,” said Harold Zakon, professor of neuroscience at The University of Texas at Austin. “One would think that the venom would at least cause a little more pain than the saline solution. This would mean that perhaps the toxin plays a role as an analgesic. This seemed very far out, but we wanted to test it anyway.”

Rowe and Zakon discovered that the bark scorpion toxin binds to sodium channels in the mouse's pain neurons, which blocks them from firing off a pain signal to the brain. The neurons have two different channels, 1.7 and 1.8, and toxins traditionally stick to the former to get the channels to open and fire off the pain to the brain.

Through gene sequencing, the boffins found that the 1.8 channel in the grasshopper mice has different amino acids to the 1.8 channel of other mammals that are sensitive to the scorpion stings – which include house mice, rats and humans.

“Incredibly, there is one amino acid substitution that can totally alter the behaviour of the toxin and block the channel,” said Zakon.

However, the team still need to figure out why the grasshopper mice doesn't just die from the toxin.

“We know the region of the channel where this is taking place and the amino acids involved,” said Rowe. “But there’s something else that’s playing a role, and that’s what I’m focusing on next.”