Luckily 'Call yourself a hacker' ruling doesn't apply in California 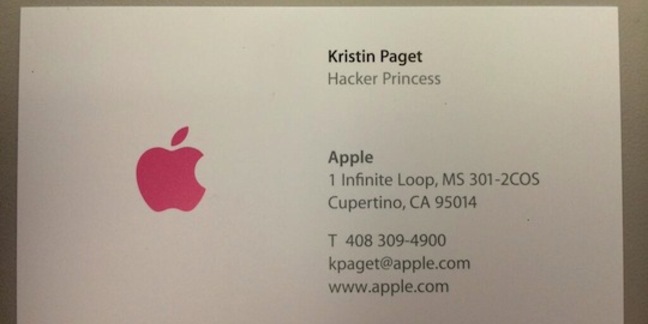 Apple has given a job to a "princess hacker" in a move that potentially opens the fruity firm up to police raids... that's if its new employee ever visits Idaho.

But Paget risks attracting the unwanted attention of police, because a US district court has ruled that anyone calling themselves a "hacker" forfeits their Fourth Amendment protection against unreasonable searches and property seizures.

An Idaho court decided that a software developer’s computer could be seized without warning, simply because he admitted that he likes "hacking things and [doesn't] want to stop”.

Although the ruling does not carry over to California, it raises the very real prospect that Paget's computer could be seized if she visits Idaho. If she works there, cops might even be able to justify booting her door down.

Finally got around to picking a job title and ordering some business cards. I'm now officially a Hacker Princess :) pic.twitter.com/iHGFlV3rJQ

Amused, confused, and totally flattered that my new job title is so popular. It's the strangest things that remind me why I <3 twitter :)

However, other Twitter users quickly warned Paget of the risk of losing Fourth Amendment protections, to which she replied:

@geekable Saw that. Not impressed, but not surprised either. IMHO the best defense is "don't sufficiently piss people off"...

Paget was part of a team of hackers roped in to work on the security of Windows Vista. She is now working for Apple and describes herself as "just a girl who hacks things. iThings, currently".

Paget, formerly known as Chris, has kept her own transition from male to female far less hush-hush than the day job. On her blog, Tom Bom, Paget shared intimate details of her gender journey, detailing her new-found experiences of PMS, a hormone-induced drive towards "nesting" and the onset of "girlbrain".

She also used the blog to thank the infosec community as well as her wife for the support they offered during her transition.

Paget's story also raises the curious thought that Apple employees are allowed to choose their own job title. What snazzy name would you pick if you worked for Tim Cook and co, commentards? ®

Happy 1.0 to the fruits of volunteer labour