Obama to Merkel: No Americans are listening to you on this call

Nor will we listen to you in future, on this 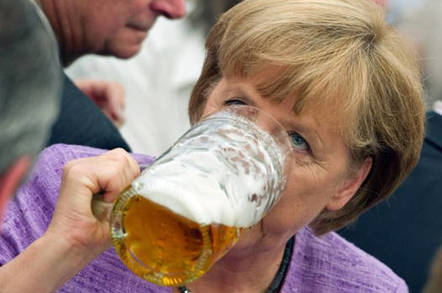 Germany's relationship with the US turned decidedly frosty today after Angela Merkel's government said that the Chancellor's mobile phone may have been tapped by American spies.

Washington attempted to prevent a row over alleged surveillance escalating with Berlin by confirming that President Barack Obama had told Merkel that the US "is not monitoring and will not monitor" the chancellor's telephone conversations, German magazine Der Spiegel reported.

However, a White House spokesman declined to comment - when challenged - on whether the US had snooped on Merkel's mobile communications in the past, according to the Washington Post.

The chancellor's aide said that Merkel had made it clear that such practices, if found to be true, were "completely unacceptable" and that she "condemns them unequivocally".

He added that such actions would be a "grave breach of trust" and said any such monitoring should be "immediately stopped."

Earlier this week, the European Parliament voted in favour of strengthening the 28-member bloc's data protection legislation - partly in response, it said, to recent revelations about US spooks spying on its allies. ®