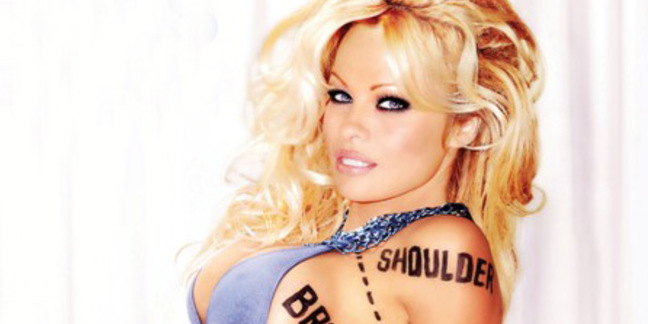 Former Baywatch thesp Pamela Anderson has written to the Spanish Senate asking it to reject a bill which would declare bullfighting part of the nation's "Cultural Heritage".

The talented entertainer - who last month enjoyed a trip to Spain - has joined growing opposition to the move, which would see the "cruel pastime" protected and eligible for state subsidies.

Kicking off her letter with a jolly "Greetings from California", Pammie says: "Spain is a modern country with a wealth of treasures - art, architecture, and music, to name just a few - which is why many people from around the world enjoy visiting it and experiencing its rich heritage. But in 2013, in an otherwise civilized society, seeking to continue the gratuitous slaughter of sentient animals is perverse."

She adds: "I have spent my career entertaining people, but I know that there is nothing remotely entertaining about stabbing bulls to death in bullfighting arenas.

"Tormenting bulls for entertainment belongs to the Dark Ages, not the 21st century. Please take a compassionate stance against this cruel pastime by rejecting the bill to protect bullfighting. I guarantee that you will win the hearts, including mine, of citizens around the world."

According to the PETA press release which accompanied the missive, Spain is under international pressure from a coalition of animal protection organisations, which last month dumped a 250,000-signature petition on the government's doorstep opposing the bill.

This is unlikely to sway the ruling right-wing Partido Popular, which has become increasingly defensive of bullfighting as a symbol of national identity since Catalonia banned it in 2011, partly due to a "desire of Catalan nationalists to distinguish the region from the rest of Spain and its traditions", as the BBC puts it.

However, while the PP can dismiss the opinions of do-gooding foreigners, and indeed bikini-clad Canadian-turned-Californian campaigners, it still faces strong local opposition to the proposed legislation. Last week, the Galician pressure group Mellor sen Touradas ("Better without Bullfights") delivered a petition to the autonomous region's government, in which 100,000 Spaniards expressed their dissatisfaction with the Cultural Heritage move.

According to a Spanish Ministry of Culture report (Survey on Cultural Habits and Practices in Spain 2010-2011, PDF here), just 8.5 per cent of the population went to a bullfight during the survey period.

That figure was gleaned from responses from 16,000 citizens. Bullfighting opponents present a rather less representative 2013 Ipsos MORI poll (1,017 online interviews) as evidence of the sport's decline. It showed that "only 29 per cent of the population support bullfighting", while "76 per cent oppose use of public funds to support the bullfighting industry". ®