Stick that up your Wi-Fi, pal 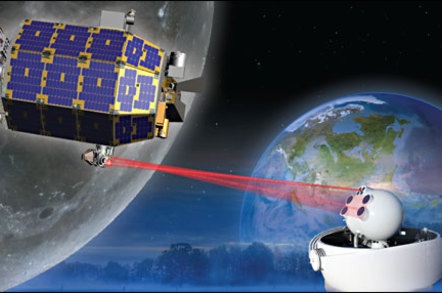 NASA has successfully tested a broadband communications system built into its Lunar Atmosphere and Dust Environment Explorer (LADEE) probe, firing data to and from the Moon at rates of up to 622Mbps.

LADEE, launched last month (to the detriment of an unfortunate amphibian), houses a number of instruments designed to measure the state of the Moon's scarce atmosphere while orbiting the space rock.

But it also has NASA's Lunar Laser Communication Demonstration (LLCD) built in, which is a series of lasers on the outer hull designed to shoot back data to three base stations here on Earth much faster than traditional radio data links – and the agency reports the first tests have been a roaring success.

"LLCD is the first step on our roadmap toward building the next generation of space communication capability," said Badri Younes, NASA's deputy associate administrator for space communications and navigation (SCaN) in a statement.

"We are encouraged by the results of the demonstration to this point, and we are confident we are on the right path to introduce this new capability into operational service soon."

NASA has been facing the same problems with space communications that bedevil us here on Earth – too much data and not enough bandwidth. Radio communications have been used ever since the agency first lofted objects into space, but it is stymied by limited spectrum and capacity.

The LLCD system uses lasers mounted on the outside of the LADEE probe to send back bytes to Earth, where base stations in the US and Spain can pick up its signals. These stations use pivoting 15cm telescopes to act as transmitters and four 40cm reflective telescopes as receivers.

Sadly the LLCD system won’t be up and running for much longer. After the LADEE probe has spent 100 days sampling the Moon's atmosphere the craft will be sent on a kamikaze dive into the lunar regolith to avoid cluttering up the dusty globe's orbital paths.

But by 2017 NASA hopes to launch its successor, the Laser Communications Relay Demonstration (LCRD). This will put new hardware for the space communications system through its paces, and see how well it survives the long-term rigors of space travel to test if it would be suitable for probes going much further than the current relatively short distance of journeying to the Moon and back.

The LCRD will be capable of shifting 1.25Gbps of encoded traffic, or 2.88Gbps of uncoded data using laser equipment that is just four inches long and which uses considerably less power than a radio communications system. The mission will last two years and, if successful, will let a new generation of probes send back petabytes of information about our neighbors in the Solar System. ®