If you can't win contracts, then you need a swanky showroom 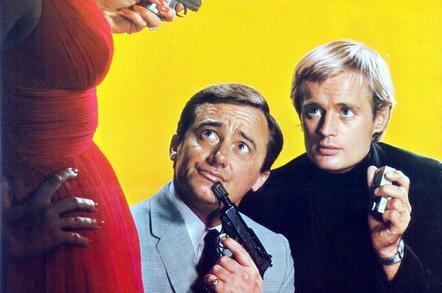 IBM is building a US government cloud center in Washington DC to win over public-sector tech buyers.

The pork barrel procurement barn Federal Cloud Innovation Center was announced by Big Blue on Tuesday. The IT giant will chain – "align" – some 500 technical experts to its erection in the capital and show off its platform-as-a-service, infrastructure-as-a-service and software-as-a-service products.

"These IBMers will be a resource focused on government clients and will be brought in for projects or for research collaborations with government clients," IBM spokesman Michael Rowinski told El Reg via email today. "IBM has a pretty active first-of-a-kind research program that teams IBM researchers with clients on breakthroughs in technology."

An unspecified number of staff from bare-metal cloud acquisition SoftLayer will be assigned to the center as well, a spokesperson confirmed to El Reg on Tuesday.

News of the Washington center comes at a critical time for the company, given its ongoing tussle with Amazon for a lucrative $600m CIA cloud contract.

Though federal government workloads are IBM's traditional bread and butter business, the initial loss of the contract to Amazon – IBM objected, a judge struck the objection down, now IBM is appealing and has used SoftLayer assets in a follow-up bid – seems to have spooked Big Blue enough to elicit a flurry of cloud marketing: this includes an announcement touting the win of a $30m federal cloud contract in September – a mere 20th the size of Amazon's win.

Amazon had been praised by the CIA for its technical proficiency, transparency, and use of well-proven technology. IBM, by comparison, was chided for ginning-up bespoke technologies purely for the contract bid, and for a lack of proven technical expertise in large-scale clouds.

But that's not discouraging IBM, mind, for elsewhere in the Federal Cloud Innovation Center statement the general manager of IBM's US Federal business, Anne Altman, said: "Now is not the time for government to settle for what is only available commercially. Now is the time for them to join with industry to build security, reliability and standards that will make for a trusted government cloud environment."

This point of view draws our minds to a bespoke shoe that requires more of a relationship with the manufacturer, is difficult to replicate with another shoemaker, can cost more, and is much harder to step out of.

The center will also help the government work with IBM to investigate using open-source and open-standards technologies within future IT programs, the company said.

"We see a tremendous opportunity to further the development of cloud technologies with the federal government by providing access to the latest breakthroughs in security and reliability coming out of IBM's research labs," Dr. John E. Kelly III, IBM senior vice-president and director of IBM Research, said in a canned statement. ®