How faulty levelling caused Jesus phone to lose its balance 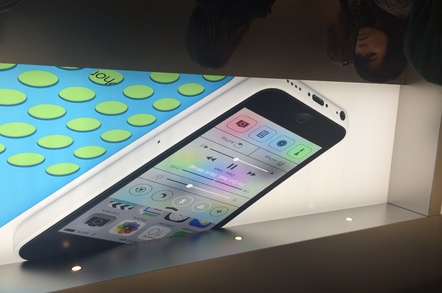 Balance problems plaguing the iPhone 5S popped up with the first reviews. But a teardown by Chipworks and the musings of an iOS dev have isolated a likely reason why the steering on that motor racing app is about 5 degrees off.

It's all down to a replacement accelerometer which lacks the accuracy of its forebear.

Although inaccuracies in the iPhone 5 accelerometer are not a critical issue, they have certainly annoyed some users, and have definitely irritated developers.

The problem in Apple's latest uber-phone shifts gravity by as much as five degrees, but now iOS dev RealityCap has a theory, based on the iPhone 5S teardown, which discovered that Apple has substituted the ST part used in previous models for a lower-power alternative from Bosch.

Talking in the company blog, RealityCap CEO Eagle Jones explains that the two parts are similar, and remains at a loss to explain why Apple made the switch – though he does have some suggestions for addressing the problem.

The new part, the Bosch Sensortech BMA220, does use a little less power. The consumption is roughly the same though it only requires 1.8 volts compared to the 2.5 volts consumed by the previously-favoured ST LIS331DLH, so that might explain the switch.

Jones argues that the prices are roughly the same, but component prices are very hard to judge as they're hugely dependent on scale and often vary based on what other goods one is ordering and the bragging value of one's brand.

Ask a component supplier how much something costs and they'll invariably reply "how many do you want", a statement generally followed (in your correspondent's experience) by lunch and a few drinks to narrow both numbers into something from which one can negotiate.

The Bosch part is, according to the specifications, less accurate than the ST alternative, and accounts for the variance seen by iPhone users, but Chipworks also reckons the variance on a particular device doesn't change, so the problem could be fixed with a calibration process of some sort.

Apple could do that, as part of the production process, but has shown no inclination to do so. Developers can now think about how they might implement such a thing and RealityCap promises to share some ideas on the subject in the near future. One way or another, the days when an iPhone doesn't know which way is up are probably drawing to a close. ®