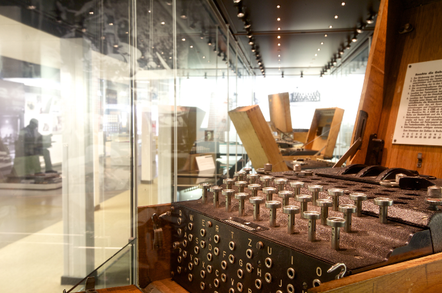 And he warned other scientists will be put off from visiting America if they face a similar struggle, which will effectively drive experts to Europe and China.

Shamir, who just before all the Snowden leaks kicked off warned of a post-crypto world, submitted a paper for the conference and was accepted onto its program months ago.

The award-winning cryptographer had planned to journey from his native Israel to the US to attend the Symposium in Maryland, stopping off at the Crypto 2013 conference in Santa Barbara, California, in August, as well as several universities and research institutes to meet colleagues and give lectures. Shamir founded the Crypto conference 32 years ago and was keen to attend this year.

The whole trip was scheduled to take months, yet as a frequent visitor to the US who has previously enjoyed extended stays, Shamir didn't anticipate any problems when he applied for a J-1 visa: he filed his paperwork in late May, two and a half months before he planned to fly to the US.

However even after "applying some pressure and pulling a lot of strings", Shamir said he only had his visa stamped into his passport on September 30, exactly four months after filing his application, and way beyond the requested start date of his visit. His passport was stamped right on the eve of the US government shutdown, narrowly avoiding further delays.

By this point Shamir's travel plans had been thrown into disarray. The president of the US National Academy of Science, of which Shamir is a member, tried to intervene on the crypto-guru's behalf, but without success.

Shamir's paper, titled The Cryptology of John Nash From a Modern Perspective was, we're told, pulled from the Cryptologic History Symposium programme in July after he informed the organisers there was an issue with his visa and asked them for help. Shamir remained determined to visit the US anyway and accepted invitations to speak at MIT and give a lecture this week.

In an abrupt turn, the organisers of the Cryptologic History Symposium apparently invited Shamir back to their event, but by this time he was committed to travelling to Massachusetts to visit MIT instead. Shamir wrote emails to his academic peers explaining why he couldn't be at the conference in Maryland.

Scientists will avoid the US in future, says research centre president

The distinguished computer scientist fears his experiences are far from isolated. The president of the Weizmann Institute of Science in Israel, where Shamir lectures, wrote to the US ambassador in the Middle East nation in July complaining that boffins are being given a far harder time than ordinary folks when obtaining a visa.

The academic chief warned these difficulties could force experts to avoid visits the US or even encourage them to refuse to collaborate with American scientists. Shamir shares the same sentiments in the conclusion of his "personal apology" email to delegates at the Cryptologic History Symposium, republished by Federation of American Scientists' Secrecy News blog.

"The heavy handed visa bureaucracy you have created seems to be collapsing under its own weight," Shamir wrote of Uncle Sam's administration. "This is not a security issue – I have been to the US close to a hundred times so far (including some multi-year visits), and had never overstayed my visas. In addition, the number of terrorists among the members of the US National Academy of Science is rather small."

Shamir concluded by warning that America's red tape may prompt scientists to stick to conferences in Europe and Asia, in particular China, where they are welcomed with open arms and minimal fuss.

"As a friend of the US I am deeply worried that if you continue to delay visas in such a way, the only thing you will achieve is to alienate many world-famous foreign scientists, forcing them to increase their cooperation with European or Chinese scientists whose countries roll the red carpet for such visits. Is this really in the US best interest?" he wrote.

US cryptographers reacted with disbelief on hearing of the saga experienced by one of the godfathers of the industry.

"If Adi Shamir can't get a visa to present a scientific paper at the NSA's invitation, our laws are really broken," said Matthew Green, a cryptographer and research professor at Johns Hopkins University, in a Twitter update. Green lectures at the same Maryland university where the 2013 Cryptologic History Symposium will take place today and tomorrow. ®