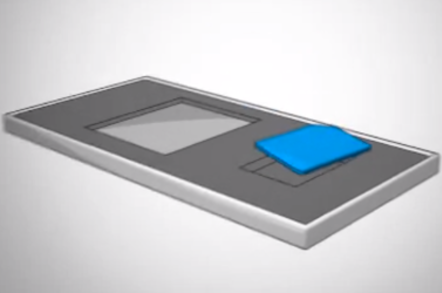 A sticker slapped onto a SIM card can cut international calls by 98 per cent, and guarantee a 50 per cent saving on business spending, without changing numbers or phones.

The sticker comes from BiBiTel, and is really a second SIM which sits between the handset and the operator SIM. Most commands are passed straight through, but international numbers are intercepted and routed through BiBiTel's service which provides discount calls on a pre-paid basis.

The tariffs are comparable to those offered by calling-card schemes, but those require one to manually enter a special number, then the number one wishes to call, while the BiBiTel sticker automates that process as the company's promotional video fails to convey:

It's not the first time an intercept has been slotted between the SIM and the handset. Developers frequently use a ribbon which breaks out SIM communication to a PC - the protocol is serial 9600 baud 8N1, so interception is technically trivial, but other than academic examination or cryptanalysis there's been little reason to bother.

One exception was the locked iPhone, which would only work with an AT&T SIM. Hackers quickly produced a wrapper which would pass through all communications except the request for a network identity, to which it would respond "AT&T" without alerting the underlying SIM.

Motorola tried to take the process mainstream in 2010, with its iSIM product which could be configured to restrict called numbers. That was taken up by Bipper, which unsuccessfully hawked it as a child-protection measure, and since then the concept has languished in the technically-impressive-but-pointless category.

We also have three different SIMs in circulation now, the traditional "mini" SIM, the replacement "micro" SIM and the increasingly popular "nano" SIM. The first two share a contact pattern, so the same sticker will work with both, and one can bodge the pattern onto a nano SIM too but BiBiTEL makes an "iPhone 4" version which has the right pattern and also lacks the sticky surface – there's not much space in the iPhone 4, so the tray holds the wrapper in place once its inserted.

BiBiTel's approach is a nice application of the idea, and should worry network operators, which make a lot of money on international calls that customers are too lazy to route elsewhere. Of course one shouldn't underestimate the laziness of consumers – who might decide that wrapping their SIM in plastic is still too much of a faff. ®