No, it's not the long awaited cyborg monkey butler 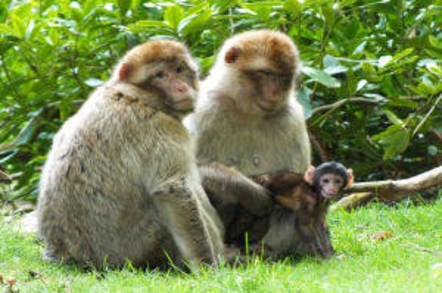 Exciting news on various important science and tech beats today, as we learn that boffins have achieved breakthroughs in the allied fields of brain-chipped monkeys, robotics and cybernetics. To wit, they have been working out how to equip monkeys wielding robot arms with a sense of touch.

Rather than monkey, robot, or monkey-robot cyborg combination butler-Terminators, however, this research is aimed at making robot arms for human beings work better. This research is funded by our old friends at the US military bonkers-boffinry bureau DARPA, hoping to deliver better replacement limbs for American troops injured in the Wars on Stuff.

“If you really want to create an arm that can actually be used dexterously without the enormous amount of concentration it takes without sensory feedback, you need to restore the somatosensory feedback," explains Sliman Bensmaia, Chicago uni prof.

Bansmaia and his colleagues set to work on this using experimental monkeys. A Chicago uni statement describes the research:

The researchers performed a series of experiments with rhesus macaques that were trained to respond to stimulation of the hand. In one setting, they were gently poked on the hand with a physical probe at varying levels of pressure. In a second setting, some of the animals had electrodes implanted into the area of the brain that responds to touch. These animals were given electrical pulses to simulate the sensation of touch, and their hands were hidden so they wouldn’t see that they weren’t actually being touched.

Using data from the animals’ responses to each type of stimulus, the researchers were able to create a function, or equation, that described the requisite electrical pulse to go with each physical poke of the hand. Then, they repeated the experiments with a prosthetic hand that was wired to the brain implants. They touched the prosthetic hand with the physical probe, which in turn sent electrical signals to the brain.

It seems that, poke-wise, the monkeys didn't distinguish between fleshy and robotic hand stimulus. In Bensmaia's view, this means we're well on our way to artificial arms with a sense of touch.

“This is the first time as far as I know where an animal or organism actually perceives a tactile stimulus through an artificial transducer,” says the prof. “It’s an engineering milestone."

Human trials are anticipated within the next year, apparently, though we here on the Reg brainplug desk would note that electrodes inside the human skull seem unlikely to become a widespread solution. Human trials may well take place, but inserting electrodes for the purpose would be most unusual: normally such trials are done with people who have already had to have electrodes inserted for other reasons.

Still, there may be ways around the need for risky, dangerous brain plugs. And so we may yet see better prosthetic arms – even if not the long desired monkey butlers – reasonably soon.

Bensmaia and his colleagues' research can be read here courtesy of the Proceedings of the National Academy of Sciences. ®

Intel and boffins let cores talk among themselves without software mediation