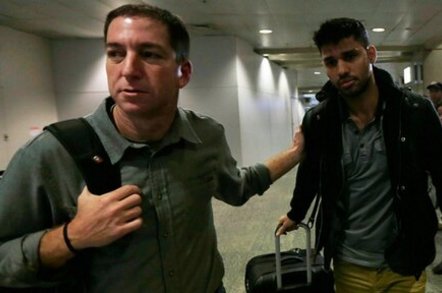 Glenn Greenwald, the journalist who made Edward Snowden a household name, has announced that he is leaving his job at the Guardian to launch what he describes as a "momentous new venture."

In a statement issued via his own website, Greenwald said that his relationship with the Graun has been a good one and that he is "incredibly proud" of what he and his editors have achieved during his time at the paper.

"The decision to leave was not an easy one, but I was presented with a once-in-a-career dream journalistic opportunity that no journalist could possibly decline," Greenwald wrote.

Guardian spokeswoman Jennifer Lindauer added in a statement that Greenwald's decision to leave the paper was his own and that the lefty newspaper wishes him well.

"Glenn Greenwald is a remarkable journalist and it has been fantastic working with him," Lindauer wrote. "Our work together over the last year has demonstrated the crucial role that responsible investigative journalism can play in holding those in power to account. We are of course disappointed by Glenn's decision to move on, but can appreciate the attraction of the new role he has been offered. We wish him all the best."

Greenwald first lifted the lid on the "Snowden files" in June and has since published a series of articles on the massive domestic surveillance programs conducted by the NSA and the UK's GCHQ.

Snowden reportedly sought out Greenwald to disclose what he knew because he considered Greenwald an "alternative journalist," one who would be more receptive to reporting on Snowden's leaks than would a paper like The New York Times, which had earlier delayed publishing a story about NSA domestic spying for a year.

In August, Greenwald said he was prioritizing his work on Snowden's NSA documents, but it's unclear whether this work will be his main focus at his mysterious new venture, as he has provided few details. The news of Greenwald's departure was first reported by Buzzfeed on Tuesday, which Greenwald says was sooner than he was ready to announce it.

What he has said is that he will be part of "a general media outlet and news site," and that while "political journalism" will be his focus, he will be involved in all aspects of the online publication, including features, sports, and entertainment coverage.

"My role, aside from reporting and writing for it, is to create the entire journalism unit from the ground up by recruiting the journalists and editors who share the same journalistic ethos and shaping the whole thing – but especially the political journalism part – in the image of the journalism I respect most," Greenwald told Buzzfeed in an interview.

The organization's "main hubs" will reportedly be in New York City, Washington DC, and San Francisco, but Greenwald himself plans to remain in Rio de Janeiro, Brazil, where he lives with partner David Miranda, who has been assisting him in some of his Snowden coverage. ®