Beat that, WiFi! And suck it up, fibre-to-the-premises fans 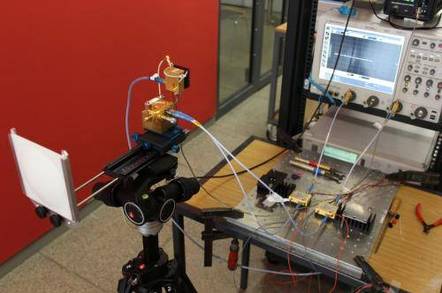 German researchers are claiming a world record, using a 237.5 GHz carrier and photonic mixing to achieve a 100 Gbps wireless link.

Don't throw away that WiFi kit just yet, however: while the reach, at 20 metres, is good enough to cover most household applications, the setup is a little bit exotic at this point in the system's development.

If commercialised, however, the researchers hope their 100 Gbps-capable link could act as a fibre extender in FTTN-style deployments, telling Phys.org “this technology represents an inexpensive and flexible alternative to optical fiber networks, whose extension can often not be justified from an economic point of view”.

The signals were generated using a photonic mixer from NTT Electronics, with custom-made receiver silicon built by the Fraunhofer Institute of Applied Solid State Physics.

Using photonics to generate the carrier wave is important, since it's difficult to work with electrical signals at such high frequencies. The photonic mixer took two light signals generated by lasers, with the difference between them resulting in the modulated 237.5 GHz electrical signal.

That was then fed to a conventional antenna for transmission to the receiver.

As the researchers describe the experiment in their Nature Photonics abstract: “a narrow-band terahertz carrier is photonically generated by mixing comb lines of a mode-locked laser in a uni-travelling-carrier photodiode. The uni-travelling-carrier photodiode output is then radiated over a beam-focusing antenna. The signal is received by a millimetre-wave monolithic integrated circuit comprising novel terahertz mixers and amplifiers.”

Professor Jürg Leuthold explained that the linearity and wide bandwidth of the photonic mixer makes it suitable for “advanced modulation formats with multiple amplitude and phase states”, meaning that it also provides good spectral efficiency. 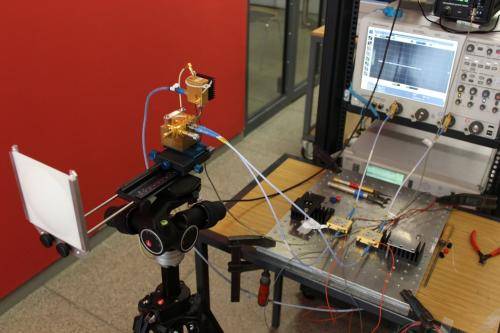 to an oscilloscope. Image: KIT