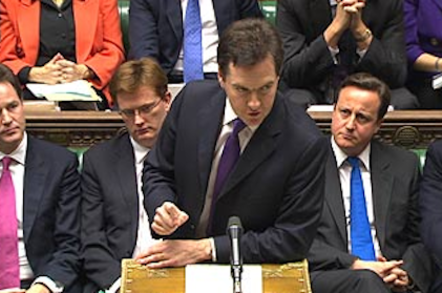 Osborne kow-towed to infamous network infrastructure biz Huawei during a speech to students at Peking University, which marked the beginning of a five-day charm offensive in China.

He said that Britain would not block Huawei from investing in Britain, even though a growing list of countries including the US, Australia and India have either banned Huawei kit outright or imposed additional restrictions on allowing the Chinese firm's gear into their national networks.

Osborne told the students: "Take your great high-tech company, Huawei. There are some Western governments that have blocked Huawei from making investments. Not Britain. Quite the opposite.

"That is why I was pleased to welcome Huawei’s opening of a flagship office in our country in June, and of £1.3bn of investment that came with it."

So what does Britain get out of this deal, which has always been controversial, given the fact that Huawei was founded by a former member of the People's Liberation Army and still maintains strong links with the Chinese state?

Osborne wants to work with China on big issues like technology, bioscience, green energy and third generation nuclear power, but he also had a few other ideas about what China might like to buy from the UK.

He said: "Last year, goods exports from Britain to China grew faster than any other European nation. As your country and its people grow richer, I hope you will want more of the goods and services Britain can supply... our modern pharmaceuticals. Our premier luxury brands like Burberry and Paul Smith. Our excellent cars from Jaguar Land Rover and Bentley. Our aero-engines from Rolls Royce and airplanes from Airbus. Our high quality film and television, from James Bond to Downton Abbey.

"At 160 million, more than twice as many people in China are watching the goings-on in Downton Abbey as live in the whole UK."

Some critics will say that a deal with Huawei is dangerous, because it is consistently accused of spying for the Chinese government.

However, Huawei denied allegations from a former American spy chief that it carries out espionage on behalf of China. It also dismissed claims that its links with BT are a threat to British security.

Instead, Huawei told The Reg that it posed no security threat to Western states and was simply interested in a "packet in, packet out" policy.

The Chancellor has also announced he will relax visa requirements for Chinese visitors in a bid to attract businessmen and tourists alike. ®

Firm told: Contracting with Uncle Sam is a privilege, not a right