A new paper has found hitherto undiscovered rhythms in the climate. What is today regarded as random natural variability actually conforms to a “standing wave” (aka, Mexican Wave) pattern, boffins have found, meaning the climate is much more predictable than previously thought.

Dr Judith Curry, chair of the School of Earth and Atmospheric Sciences at the Georgia Institute of Technology, and co-author Marcia Wyatt found a regular patten, or wave, in what was previously attributed to natural climate variability.

This has two key components: the Atlantic's regular shift from warm to cold (the AMO or Atlantic Multidecadal Oscillation), and sea ice extent in the Arctic seas. Wyatt and Curry used a statistical technique over a range of indices, called Multi-Channel Singular Spectrum Analysis (MSSA) . By removing the long-term trend from man-made greenhouse gases they found multi-decade long patterns evolving in an ordered manner.

The wave starts with a cold Atlantic ocean and maximum ice extent in the European Arctic seas, then propagates east through Siberia where it's converted to a warmer atmospheric pattern over Eurasia and then moves out the Pacific.

The oscillation may explain the contemporary “pause” in global warming, with no statistically significant increase in the past 17 years. Curry et al say a cooling Atlantic and rebounding Arctic ice is entirely consistent with the stadium wave.

Contemporary climate models fail to recognise the oscillation, the scientists note, which is why they're so off target. This is a problem the IPCC recognised in drafts of the Summary For Policy Makers, a preface to its Fifth Assessment (Working Group 1) Report, before deleting the acknowledgements in the published version. (Politicians and bureaucrats have the final say in what's published) 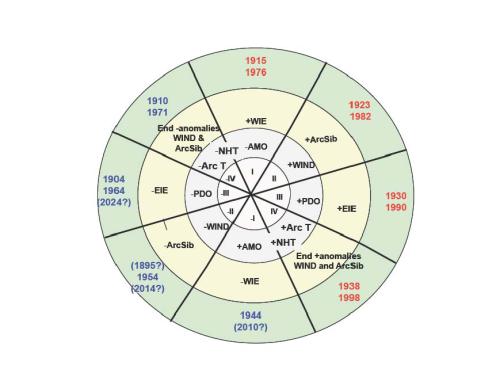 Which means there's good news for Sir Bob Geldof, who recently predicted the extinction of the human race by 2030 because of global warming; if the stadium wave is taken into account, the pause could last into the 2030s. A recent Nature-published meta-study that predicted an unrecognisably warmer global climate by 2047 can also be disregarded - since it's based on today's flawed climate models.

“Current climate models are overly damped and deterministic, focusing on the impacts of external forcing rather than simulating the natural internal variability associated with nonlinear interactions of the coupled atmosphere-ocean system,” Curry said.

So, what could be causing the oscillations?

Solar-planetary influences were until recently taboo for researchers, but are beginning to look like an increasingly promising explanation. The Sun's circa 11-year Schwabe sunspot cycle and 22-year Hale magnetic cycle are well known - but others have been identified. Nature recently published an editorial by University of Montreal physicist Paul Charbonneau which suggest planets modify the amplitude of the cycle. He's far from alone, these days.

Late last year a paper by physicists asked 'Is there a planetary influence on solar activity?' (Abreu et al - source) - and found a planetary model correlated closely with magnetic activity (using 14C as a proxy) over 9000 years.

The official account has pooh-poohed any link - but perhaps the climate establishment has simply been looking in the wrong place. The IPCC-sanctioned account only takes into account the Sun's TSI, or Total Solar Irradiance, and not on its magnetic influence or the subtle modulation effects of the planets. With the official account now found to be found wanting by nature - we should expert more from the “experts”.

And climate blogger Roger "Tallbloke" Tattersall is working on another theory. ®

UK's Cleveland Police: We want to fling our HR wares into the cloud. Oh, and IT can move back in