We're not giving up, you know 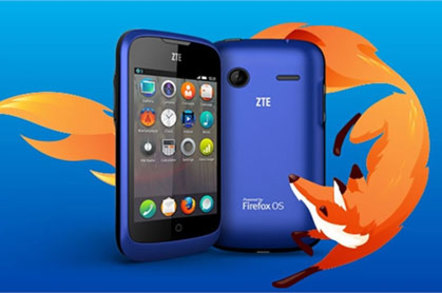 The Mozilla Foundation has released Firefox OS 1.1, the first significant update to the web-based smartphone platform it launched in July.

"Just weeks after the first Firefox OS phones hit the market, an update is being made available adding new features, support for a number of new languages and significant performance improvements," the open sourcers explained in a Wednesday blog post.

Among the new additions are MMS (multimedia messaging service) support, a new API for push notifications, and improvements to several of the bundled core apps, including the calendar, the contacts manager, and the email client.

Many of these fixes are welcome improvements on the original version of the OS that El Reg took for a spin back in September. For example, Firefox OS can now import contacts from Gmail and Hotmail, where before it could only pull them from Facebook (and even that was spotty).

In addition, the onscreen keyboard, which was a frustrating bare-bones affair in version 1.0, has been enhanced with an auto-correct feature that can help fix misspelled words.

Firefox OS still has a long way to go before it can compete feature-for-feature with the likes of Android. But the fact that the Mozillans have shipped a major update mere months after the first version debuted demonstrates that they're serious about making it a viable, competitive platform.

In July, Mozilla's product release manager said the foundation plans to ship new feature updates four times a year along with security fixes every six weeks, and so far, it appears to be on track.

Mozilla also clearly wants to expand its platform's reach. So far, Firefox OS phones are only available through carriers in select markets – including Colombia, Poland, Spain, and Venezuela – but Firefox OS 1.1 has now been localized for 15 languages.

The update hadn't been pushed to The Reg's ZTE Open handset as we went to push the big, red Publish button, but Mozilla says it will be arriving on the current crop of developer phones "soon." ®