Stallman's GNU at 30: The hippie OS that foresaw the rise of Apple - and is now trying to take it on

Provided we all dump Android for Replicant, yeah? 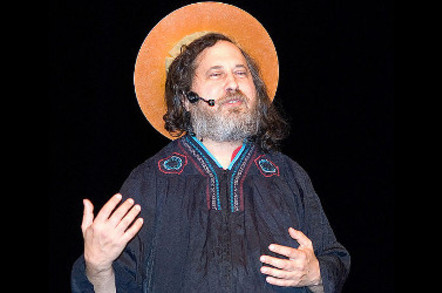 Analysis GNU fans have celebrated their software movement's thirtieth birthday - a movement that started as rebellious bits and bytes of tools, and is now a worldwide phenomenon.

Today, servers, PCs, mobile phones, tablets, and all manner of devices run operating systems and applications that owe their genesis to the idea of software freedom articulated by GNU founder Richard Stallman.

In September 1983 he announced he was creating GNU: Gnu is Not Unix. And, for his second trick, the Emacs programmer founded the Free Software Foundation (FSF) and wrote the GNU General Public Licence (GPL) - the lifeblood of the whole project.

Stallman is a liberal who has distanced himself from the label libertarian - a label that, perhaps for most Brits, conjures a right-leaning American stereotype who owns lots of guns, lives in Nebraska and inhabits the Tea Party fringes of the Republican Party. Basically, someone who likes to look others square in the eye and say: "You aren’t the boss of me."

But Stallman has expressed his liberal views though code, and defined four freedoms that boil down to the simple belief software should be free - and that's free as in freedom, not free as in free beer.

He felt that if his code wasn’t free - if it could not always be freely altered, improved and shared under the same conditions - then neither was he free because it would mean he lost his rights to do what he liked with his software and the computer running it. If the software wasn't free, in Stallman's eyes, that meant somebody else was being the boss of him, telling him what he could and couldn't do with his machine and his life built around it.

The bearded firebrand's rallying cry was "free Unix!" and he created GNU during what was a pivotal time for the technology industry: Unix - a capable multiuser, multitasking operating system - was really picking up steam and the Unix vendors had to play a canny game. They implemented ever-more proprietary features to differentiate themselves. This was the Unix Wars.

And while they duked it out, Stallman was busy writing a set of compatible software of which the source code was completely available and licensed so that it will always remain so: in other words, the GNU operating system stack, complete with a C compiler and other build tools, text editors, the familiar Unix utilities, plus games, spreadsheets, and so on.

Three decades on, what started as a toolkit of software components, became a movement that moved from the fringes to take on the IT mainstream.

Today, the Linux kernel is used in PCs, cars, TVs and phones; it’s packaged up and customised by Red Hat, Ubuntu and others; it runs supercomputers, ADSL modems and Google and Facebook servers; and aids most of the world’s boffinry breakthroughs at universities and laboratories. A large part of that work relies on code licensed under the GNU GPL.

The principle of always keeping the code available to all also produced the open-source movement – a corporate-friendly flavour of free software devised to market Stallman's radical vision to suits.

Whereas Stallman took a hardline on enforcing the absolute freedom to distribute source code, other licences took a softer approach, which made it possible for anyone to take some source, bundle it into a program and not necessarily have to share the work. Under Stallman's aggressive licence, anything that incorporates and relies upon GPL-licensed code must also be distributed freely under that same source-code licence.

Now we have open-source productivity suites, databases, BI tools – all things that were once closed and proprietary and very, very expensive to buy and maintain.

Success for free and open source software was slow at first, but snowballed due to the nature of the opposition: rival commercial programs were controlled by a select few and the products they produced pricey.