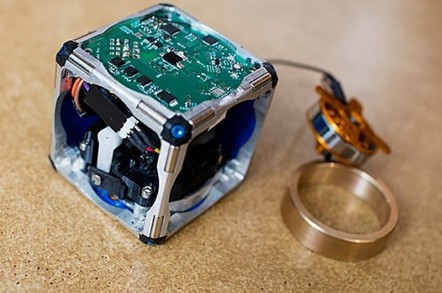 Rise of The Machines Roboticists at the Massachusetts Institute of Technology have devised a range of self-assembling cube robots, which have no external moving parts.

Despite their lack of limbs, the M-Blocks can climb over and around each other, jump into the air, roll around and even move when hanging upside down - all thanks to an inner flywheel.

The flywheel can reach speeds of 20,000rpm and when the robot cube puts the brakes on, it gives itself angular momentum. Added to this are magnets on the edges and faces of the bots that allow them to attract to each other.

“It’s one of these things that the [modular-robotics] community has been trying to do for a long time,” said Daniela Rus, a professor of electrical engineering and computer science and director of MIT’s Computer Science and Artificial Intelligence Laboratory (CSAIL). “We just needed a creative insight and somebody who was passionate enough to keep coming at it - despite being discouraged.”

Self-assembling cube-bots are already around, but those similar to M-Blocks tend to be more complex, with bits sticking out of them and a range of motors. These all allow the robots to be "statically stable", meaning that you can pause any of their movements at any time and they'll stay put. M-Blocks are different because they give up the ability to put things on pause.

"There’s a point in time when the cube is essentially flying through the air,” said postdoc Kyle Gilpin. “And you are depending on the magnets to bring it into alignment when it lands. That’s something that’s totally unique to this system.”

To compensate for the robots' instability, each edge of the cube has two cylindrical magnets mounted like rolling pins, which can naturally rotate to align poles and attach to any face of any other cube. The cubes' edges are also bevelled to allow them to pivot. Smaller magnets sit under their faces so they can "snap" into place when they land.

As with any army of modular robots, the researchers' ultimately hope that the M-Blocks' simplified locomotion system can be miniaturised for maximum malleability in what they can create - like the liquid metal scenario in the Terminator movies.

The full study will be presented at the IEEE/RSJ International Conference on Intelligent Robots and Systems in November.