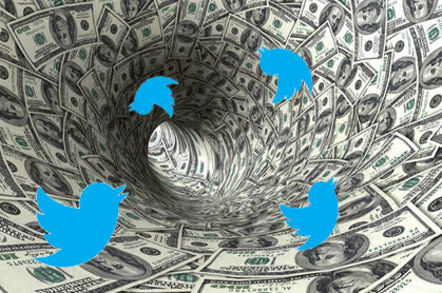 Curt babble network Twitter hopes to raise $1bn in its initial public offering, according to the company's S-1 filing.

The company revealed on Thursday in an filing with the US Securities and Exchange Commission (SEC) that it is unprofitable, has racked up a deficit of $418.6m, and expects its revenue growth to slow further. But it reckons the simplicity of its 140-character micro-messaging tech means it has a shot at signing up a sizeable portion of the internet's population.

On September 12, the company announced it would file for an IPO, generating not only huge interest among investors, but also caution given Facebook's disappointing IPO.

Twitter warns that revenue growth "will slow in the future" due to a "variety of factors" including a reduction in the incredible rate it has been acquiring users.

It also needs to make more money overseas, seeing as how in the three months ended June 30 of this year, 25 percent of its revenue came from outside the US, yet that is where 77 percent of its monthly active users reside.

This will be complicated by a spike in costs in 2013 and 2014 because the stock it owes to employees "will have a significant negative impact on our ability to achieve profitability." Expect a disapora of techies weighed down with filthy Valley lucre to emerge from Twitter and spawn a new round of startups.

During 2012, 85 percent of the site's revenue came from advertising – the rest came from data sharing and other deals – and this climbed to 87 percent in June 2013.

"We generate substantially all of our advertising revenue through the sale of our three Promoted Products: Promoted Tweets, Promoted Accounts and Promoted Trends," the company wrote.

Given the depressing effect mobile devices are having on the average price paid per advert, the company will need to diversify its money-spinning products or start slinging more ads at users.

Three-quarters of its active users and 65 percent of its advertising revenues come from mobile devices, the company said. The S-1 also claims that spam accounts represent just 5 percent of its userbase, though it does not precisely detail how it defines "spam".

Twitter was founded in 2006. At the time of writing Twitter cofounder Evan Williams held 12 percent of the company, followed by Benchmark Capital with 6.7 percent, other cofounder and chairman Jack Dorsey with 4.9 percent, and current chief Dick Costolo with a meagre 1.6 percent. ®

Guess what happens? Stockholders thaw to idea of cashing in