Squeezed budgets, data boom: We knew you'd be back for lovely TAPE 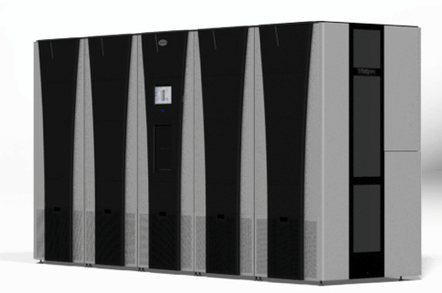 Against a background of a supposedly declining tape market, SpectraLogic revenues have grown 16 per cent year on year, helped considerably by top-of-the-range T-Finity sales.

This library can have 400,000 tape cartridge slots and store 3.6 exabytes of compressed data.

At the half year point, Spectra's sales were up 9 per cent year-on-year; it had a bonanza second half of 2013. Apparently the company has had record revenue in each of its four fiscal 2013 quarters, thanks to installing 1.2 exabytes of tape library capacity in the year, and has posted 67 per cent revenue growth since 2009.

This is some serious business, showing some people are just not listening to the tape sucks story put out by that small storage company in Hopkinton nobody's ever heard of.

Spectra's CEO Nathan Thompson said in a canned quote: “We are seeing a clear shift toward tape technologies and their unrivalled economic and capacity advantages as IT teams grapple with explosive data growth, tight IT budgets, and a prevailing mindset of ‘save all your data, forever’.”

Building on that general growth, Spectra Logic tells us it saw "12 per cent year-over-year aggregate revenue growth of its midrange tape libraries with 100+ slots and enterprise tape libraries during fiscal year 2013."

The company also bragged of:

It will hold a Spectra Summit in Boulder, Colorado, from 7 to 9 October at which it will announce "exciting new tape solutions".

Anyone would think tape was booming. ®