In defence of defenestration: Microsoft MUST hurl Gates from the Windows

No hope for post-Ballmer CEO, else 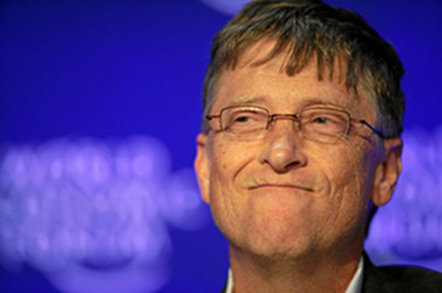 Three of the top 20 shareholders are said to be upset that Gates - tasked with picking the new CEO to replace Steve Ballmer - has too much influence over the Windows 8 giant despite only holding a 4.5 per cent stake.

It was one thing for Microsoft to see off Ballmer - but does it really want to get rid of Gates as well?

We’re talking about the co-founder of the world’s largest software company. A business and technology revolutionary who is also a global celebrity - he's someone your parents would recognise. Yet despite his fame and achievements, bookies are now taking bets on a resignation before the year’s out.

The investors are right to push for Gates to go.

He stepped down as CEO in 2000 and withdrew from day-to-day duties as chief software architect in 2008. His influence is greatly reduced and, as company chairman, he dabbles here and there as required.

Even so, Gates still has clout: he managed to persuade a sceptical board of directors to back Ballmer’s record-breaking $8.5bn purchase of the loss-making internet voice chat biz Skype in 2011.

Two years on, Skype is still a flaky VoIP service people use for free and it's not doing anything to drive sales of Microsoft’s Office and collaboration software. The Skype-tastrophe cements the belief that Ballmer steered Microsoft through what's been called the company's "lost decade" with the backing of Gates at the board level.

Ballmer was allowed to laugh off the iPhone, hand the tablet market to Apple and Google on a plate, miss the internet search and advertising train, blow billions of dollars on deals besides Skype (cough, cough, aQuantive), and burn even more money simply racing to close the gap on Redmond's competitors - all on the co-founder's watch.

And now Gates is on the three-man committee charged with finding a replacement for Ballmer, who announced his retirement in August.

Worryingly, Gates has poor form in making key hiring decisions - bear in mind he picked Ballmer to succeed him as Microsoft CEO. Since then, Google and Apple have made mincemeat of Microsoft in new markets.

Microsoft under Ballmer was dogmatic: during his reign, regardless of the question, the answer was always a Windows PC (or a Windows Phone that worked like a PC).

Gates also chose Lotus Notes daddy Ray Ozzie to be his chief software architect in 2006. Gates was right to pick an internet man – he wrote the Internet services disruption memo that was Microsoft’s call to cloud computing – but Ozzie was not the answer to Redmond's problems. Microsoft and Ozzie didn’t mix, and Ozzie was gone five years later.

Now, it's not the internet tripping up Microsoft: it’s devices. Or rather, it’s back to the age-old way of thinking that a computer running an operating system called Windows is somehow always the best and only answer the gigantic corporation can come up with in any given situation.

And shareholders now blame Gates, the chief pioneer of the Windows PC, for that.

Microsoft is suffering from the “founder's dilemma”, which haunts tech companies up and down Silicon Valley: it occurs when no one dares to criticise or disagree with the boss who set up the business, a boss who should have moved on years ago. No one wants to go against the chief out of fear or out of the belief the founder knows best.

If the company's leader is taking the right decisions, it’s all OK. It becomes a problem when the founder fails to come with Act II as the competition catches up with Act I.

I’ve seen founder's dilemma in action before, at BEA Systems and Sun Microsystems. The higher up you went inside these organisations, the more you found execs looking the other way rather than say the emperor was naked or just plain out of ideas.

Neither company now exists having both being gobbled up by Oracle.

Microsoft is still looking for its Act II

Gates turned his passion for the PC as a tool for people into a corporate slogan: "a computer on every desk". But the computer is now a tablet or a smartphone or a TV, and the desk is a hand, a lap or a living room. The PC market is in free fall and yet Microsoft is still stuck in Act I.

The problem for investors is that while Gates remains at the helm, the founder's dilemma will persist and Microsoft will continue to struggle. Under Gates, it's always been Windows and the PC first - from Office on a Windows client to software such as SQL Server on Windows Server. Nothing else gets a look in.

Microsoft’s shareholders are on the march and Ballmer moved aside years ahead of schedule. But all the investors' hard work will be for nothing if his replacement is guided by a founder tied to an old vision of computing and prone to rubber-stamping baffling business moves, such as buying Skype. ®