Satellite package can shift data round the world in just an hour, we're told 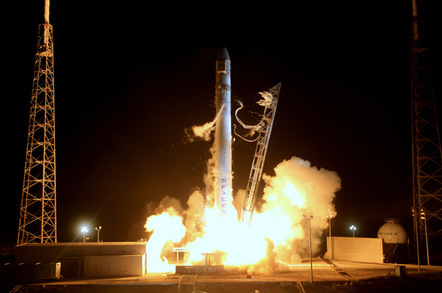 A Canadian company has strapped a terabyte-storage box to a satellite to prove it can shift large amounts of information around the world in less than an hour.

The store-and-forward gadget is attached to Canada's CASSIOPE weather-watching bird, which was launched into space by one of Elon Musk's SpaceX Falcon 9 rockets over the weekend.

Users upload huge files to the 1TB of on-board memory, and when the destination address appears underneath the orbiting satellite, the data is squirted down to the recipient. It's all very straightforward, and if it works, plenty more boxes will be lobbed into orbit.

Early versions of CDS's tech can only manage about 340Mb/sec to Earth, but the final fleet should be able to manage 1Gb/sec and thus outperform all but the fastest terrestrial connections.

CDS's Achilles heel is the latency inherent in waiting for one's destination to appear underneath the orbiting bird, which could run to an hour or more. Yet if the company threw up a dozen satellites and let them broadcast downwards, one (might) have a viable business model.

Sending hundreds of megabytes around the world can take hours, and reaching remote locations can take even longer – if it's physically possible at all. The sub-one-metre dish needed to pick up the Cascade (Ka band) signal is eminently practical and one can imagine chain stores sending out pricing updates or an oil rig returning telematics data, for a lot less money than the alternatives.

Cascade Data Services is a spinoff from the MDA Corporation, a stalwart of satellite launches and military comms hardware – not to mention the company in charge of the robotic arm that keeps dragging errant spacecraft around the International Space Station.

The Cascade technology demonstrator package is piggybacked onto the Canadian Space Agency's CASSIOPE bird, which will be analysing the ionosphere and was launched, along with half a dozen microsats, by a Falcon 9 from Vandenberg Air Force Station over the weekend. As any fule kno, SpaceX was founded by latter-day Iron Man Elon Musk.

The package will enable Cascade Data Services, and its parent, to prove that the concept is valid and put its fleet into production. ®