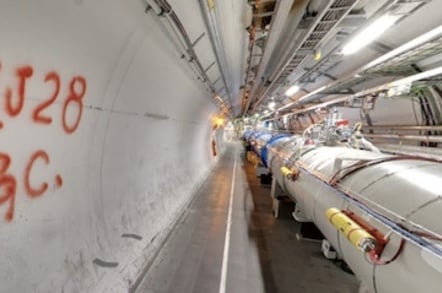 Google has dragged is Street View imaging kit to Switzerland, then lugged it beneath the earth to capture images of the tunnel containing CERN's Large Hadron Collider (LHC).

Sadly the images don't quite let you be the atom, instead offering the chance to trundle through the LHC's long and monotonous tunnel.

CERN's head of communications James Gillies said the organisation allowed Google within its walls “in order to share our amazing facilities with as wide an audience as possible”. Gillies said that audience includes boffins who work with CERN but may not get the chance to visit the LHC or see their instruments in place.

Whether the offered images will be any use to remote-experiment-conducting boffins once the LHC emerges from its current upgrade, or for future experiments, has not been explained.

Around and around the atom goes, where the universe began, nobody knows

The imaging effort has also seen Google publish some 360 degree images of other CERN installations, such as the Compact Muon Solenoid. The images aren't very detailed, so it's not easy to see just what bits of the giant machines are responsible for various tasks. Perhaps more insightful are some of the incidental sights: CERN's surprisingly grubby, some of its walls weren't poured by artisanal concrete-wranglers and there are plenty of places that look overdue for a fresh coat of paint.

The image trove can be found here. ®