Spend on Azure, get StorSimple box at the low, low price of $0 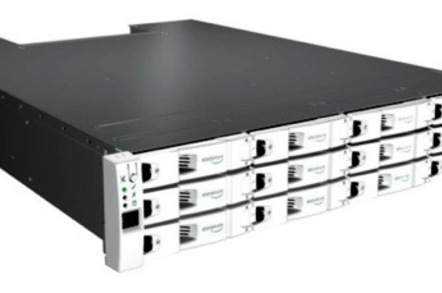 Microsoft is giving away its StorSimple arrays to customers willing to spend up big on Azure services.

Microsoft acquired StorSimple in October 2012. The company made more or less vanilla iSCSI SAN, but could also dump data intro the cloud and present that data to servers as if it were a local resource.

StorSimple arrays can still do that, and target any cloud storage service, but Microsoft has made sure it plays nicely with Azure and Windows Server 2012. In a demo seen by The Reg today in Sydney, about five minutes effort was required to create a volume on Azure and then use StorSimple to present it as just another drive available under Windows Server 2012.

Microsoft's not going after the transactional storage market, preferring instead to offer an alternative to those seeking cold storage for infrequently-accessed files. That the StorSimple arrays offer an iSCSI interface means Redmond feels its hybrid cloud plans will be attractive as applications and infrastructure won't need to be rewired to talk to cloud storage services' RESTful APIs. StorSimple boxen will take care of that chatter while appearing to be a very familiar piece of kit.

Microsoft chaps at the event floated the notion that adding a disk drawer to a conventional array can cost upwards of $200,000, while a whole StorSimple box ready to go with a few terabytes and using the cloud costs rather less. Throw in the cloud for some extra capacity and Redmon is confident it comes out ahead. That assumption came on slides that omitted mention of data egress costs, although spokesfolk were quick to note that data in cold storage won't be accessed all that often.

Microsoft concluded the event with an offer whereby organisations that spend $AUD55,000 on Azure will be given a 6.5TB array. Those willing to stump up $AUD110,000 get a 20TB box to play with. Microsoft representatives at the event said the offer is global and is based on a US dollar spend of $50,000 and $100,000. The offer expires at the end of 2013.

Microsoft's ability to make that offer comes, in part, from a hiring spree that has seen it set up StorSimple sales and support teams around the world. In Australia the company has hoovered up folks with experience at tier one storage companies. The Reg understands similar team-building efforts have taken place around the world.

Redmond's vast customer base, extensive channel and ownership of Azure's ten data centres mean it deserves to be considered a serious hybrid storage cloud contender. Without wanting to be sycophantic, the audience Vulture South was part of today agreed: asked if Microsoft is a storage company at the start of the session, almost no hands were raised. By the end of the session many more headed skywards.

The notion that Microsoft is a devices and services company also looked rather less like a surface-level presentation. ®