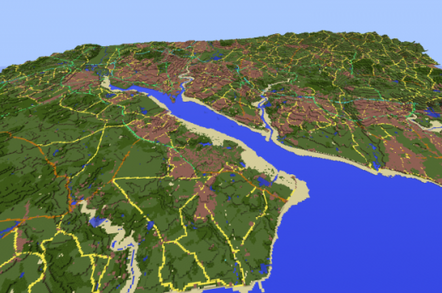 A summer intern at the UK's Ordnance Survey has pumped up the country's map data into 22-billion-block representation of Great Britain in Minecraft.

The Ordnance Survey is perfectly happy with the outcome – so much so that it's published the 3D model, which covers 224 thousand square kilometres of Great Britain.

The OS Terrain 50 is a 50 x 50 digital terrain grid, with vertical resolution of 10 metres, and was used to create the terrain for Minecraft GB.

To provide something more than a flat colour, the backdrop map product OS VectorMap District was used. Surface features like water, woodland, and roads are identified from pixel colour and density in the maps, and those were used to modify the material of individual blocks.

With so many blocks, it's hardly surprising to learn that the free download is around 345MB, and decompressed is a 3.6 GB file. The Ordnance Survey's head office acts as the starting point, and on the presumption that it'd be easy to get lost in a country-scale Minecraft world, the Ordnance provides a conversion tool so that users can take a real grid reference (from its OS getmap service) and convert it to a Minecraft GB grid reference.

To build the model, Braybrook and his supervisors at the Ordnance took the UK's 100 x 100 km grids. The Ordnance elevation and image data were loaded for each grid square, and each 20 x 20 pixel region of the raster data was analysed to choose material for each block, blocks are assembled into chunks, and chunks into the whole island. The process, once commenced, takes about 7 hours on a desktop PC.

The only fudge in the creation has to do with elevation: “A maximum height of 2,500m was chosen, which means Ben Nevis, appears just over 128 blocks high. Although this exaggerates the real-world height, it preserves low-lying coastal features such as Bournemouth's cliffs, adding interest to the landscape,” the Ordnance explains on the download page. ®

Bootnote: Before anyone complains about Braybrook's waste of time: you're supposed to learn things as an intern, and programming a feature-extraction that'll run across the whole of an island certainly sounds like learning took place. ®