Sets sail for Redmond with chests filled with Finnish booty 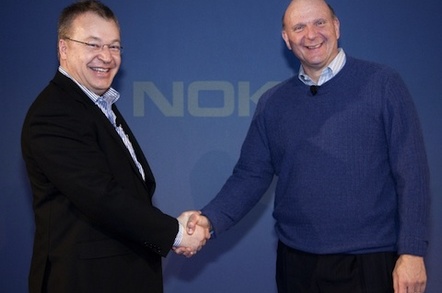 Outgoing Nokia CEO Stephen Elop will receive compensation and bonuses totaling approximately $25.4m as he departs the company for his new position at Microsoft.

The payout was revealed in proxy materials for the Finnish firm's "Extraordinary General Meeting" to be held on November 19, during which shareholders are expected to approve the sale of Nokia's devices and services business to Microsoft.

Assuming that deal goes through, the 49-year-old Elop, a former Microsoft executive, will return to Redmond – he maintained a residence there throughout his time at Nokia, and his family never moved to Finland – but not without lining his pockets first.

Under Elop's service contract with Nokia, he is due a one-time payment equivalent to 18 months of his base salary plus a "management incentive", totaling $5.5m. In addition, he will receive roughly $19.9m in stock awards (actual value to be determined), only 30 per cent of which will be paid out by Nokia; Microsoft will cover the rest.

This windfall comes just three years after Elop signed on as Nokia's CEO, a move that netted him another $6.2m in bonuses, plus $1.1m to cover fees and legal expenses. If you're keeping track, this means that once the sale to Microsoft closes, Elop will have been paid a total of $10.9m per year just to move offices, not including his annual compensation and bonuses.

By comparison, Olli-Pekka Kallasvuo, the man Elop replaced as chief exec, left Nokia with around $5.8m in severance pay and 100,000 Nokia shares – shares that are now worth 34 per cent less than when Elop took the corner office in 2010.

Many critics blame Elop for Nokia's flagging fortunes, particularly his controversial decision to bet the company's smartphone business on Microsoft's unpopular Windows Phone mobile OS. Teams working on non-Windows software got the axe under his tenure, even as Nokia's share of the global smartphone market dwindled into single digits.

Rumors that Elop was grooming Nokia for an eventual sale to Microsoft began shortly after he joined the company, but they were routinely pooh-poohed. In June, The Wall Street Journal reported that Microsoft had walked away from acquisition talks with Nokia and wasn't likely to try again. The two companies reached an agreement three months later, and the deal is expected to close at the shareholders' meeting in November.

As part of the sale, Elop is expected to take up a new position "pursuant to the terms of an employment agreement with Microsoft." He is widely believed to be a front-runner for the chief executive seat, following Steve Ballmer's announcement that he plans to step down within the next 12 months.

What Microsoft's board might be willing to offer Elop the job of filling Ballmer's sweaty shoes, your Reg hack can only speculate. ®

Two weeks before Chrimbo? When Dell V-Class shareholders get to vote on THAT deal