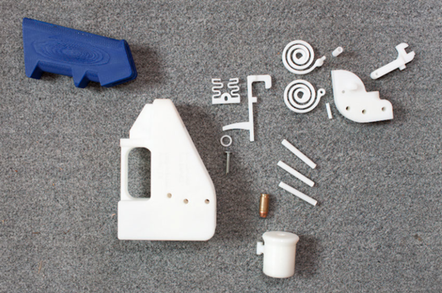 The Liberator, the 3D printed pistol that debuted earlier this year and quickly earned a ban from The US State Department and The Reg's scorn, has found its way into London's prestigious Victoria & Albert Museum.

The V&A, as the museum is affectionately known, specialises in decorative arts and design. The Liberator falls into the latter category, with the museum acquiring two prototypes as part of its efforts for this year's London Design Week which kicked off on the weekend.

A statement from the museum carried by architecture, design and interiors site Dezeen says the V&A acquired the pistols because “The invention of this so called ‘wiki weapon’ sparked intense debate and upended discussions about the benefits of new manufacturing technologies and the unregulated sharing of designs online.” The two Liberator prototypes the museum now possesses are said to :enhance its collection of 3D printed objects and represent a turning point in debates around digital manufacturing.”

The Liberator is not unique in being a dud product that nevertheless made it into a prestigious museum within months of its launch. IBM's 1995 ThinkPad 701, better known as the butterfly thanks to its folding keyboard, made it to New York's Museum of Modern Art in 1996. It's still there now online , if not in the flesh. Various Apple products have also made it into museums. ®

Super Cali: Be realistic, 'autopilot' is bogus – even though the sound of it is something quite precocious

Cupertino: 'We ALWAYS pull apps from Store during legal battles'