Dell, the man, prevails in quest to wrest Dell, the company, from Wall Street

Private parts are great, but now what? 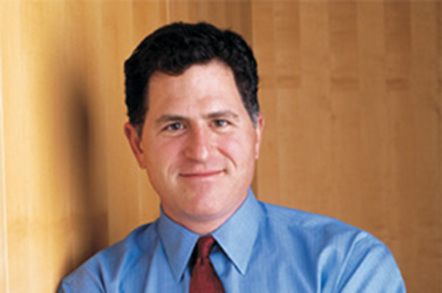 Analysis So that's done, then. Shareholders of IT giant Dell have approved a $24.9bn private takeover bid put together by company founder Michael Dell, Silver Lake Partners, and borrowed dough from Microsoft and a slew of banks. Now Wall Street will be off Dell's back as it tries to reorganize itself for the future of computing, networking, storage, software, and services.

Taking Dell private was the easy part, despite the fights with Southeastern Asset Management and corporate raider Carl Icahn, neither of which put a real offer on the table that was competitive to the one put together by Big Mike & Friends. No surprise there. The machinations seemed to be more about making Dell, the man, spend more of his own money to take the company private than about trying to actually put together the cash to beat Big Mike at his own game.

Dell is too expensive for someone else to acquire, and the transformation the company's founder is trying to engineer has too many risks to justify the costs. Only a company founder with a legacy to protect, a company cash hoard to do a large portion of the deal, and rich friends willing to loan him the money to do the rest, would do such a deal.

As El Reg has pointed out before, Dell has $12bn in assets outside of the company in addition to his nearly 15 percent stake before the deal went down, so he is not risking his fortune even if he is risking his sacred honor. If Dell wanted to impress El Reg, he would have liquidated MSD Capital and done the deal without loans from Microsoft, Silver Lake, or those banks.

Dell, the man, is not stupid, so he didn't do that. ("If he is so smart, why is he not rich? Oh wait ...") He likes going to Davos and being a courted billionaire. (And really, who wouldn't?) But the fact that Dell did not take back his company with his personal fortune also speaks volumes about the risks that Dell, the company, faces as it tries to become a software and services player as its key PC market declines and it gets tougher and tougher to extract profits from servers.

More importantly, as we have pointed out since this deal started making headlines back in January, Dell utterly missed smartphones, tablets, and cloud computing services for both raw infrastructure and applications.The latter is all the more alarming because Dell was building very good and cheap servers for other cloud builders as Amazon defined and then dominated the public cloud – so much so that it junked its own public cloud efforts back in May.

It will be interesting to see how Big Mike sets his goals and meets them, and if he might one day regret not having done the transformation as a public company, and maybe started a lot earlier than 2008. If he does regret it, we will never know, of course.

Going private won’t change Dell's valuation as it goes into the future. It just changes who knows about it. And, as it turns out, it doesn't change the rhetoric coming out of Dell, which is still a public company until the financing is fully lined up and it closes.

Brian Gladden, Dell's CFO, said on a call with Wall Street analysts and the press after the leveraged buyout passed muster with the shareholders that the company expected to line up the money and be private before Dell's current quarter ends on November 1. He added that the company would still engage with the Street and the press, giving some kinds of metrics that its strategy was working.

Big Mike showed up for the beginning of the conference call, read a few lines, and then stepped out of the room before the questions started. What he said could have been extracted from any number of Dell events and presentations over the past several years:

"This is a multi-year strategic effort, focused on practical innovation, and efficient, simple and affordable solutions, and is complemented by direct a customer relationship model. In taking Dell private, we plan to go back to our roots, focusing on the entrepreneurial spirit that made Dell one of the fastest-growing and most successful companies in history.

We are unleashing the creativity and the confidence that have always been hallmarks of our culture. We will serve our customers with a single-minded purpose and drive innovations that will help them be more productive, grow, and achieve their goals. We stand on the cusp of the next technological revolution. The forces of cloud, big data, mobile, and security are changing the way people live, businesses operate, and the world works – just as the PC did almost 30 years ago. These innovations are presenting enormous challenges and opportunities for our customers and our company.

Now is time to do what Dell does best: to make these innovations simpler, more affordable, and more accessible, putting more power in the hands of more people than ever before. We still have a long way to go and a lot of challenges to meet, but under a new private structure, we will have the flexibility to accelerate our strategy and pursue organic and inorganic investment without the scrutiny, quarterly targets, and other limitations of operating as a public company.

Here's the Big Mike five-point-plan for Dell looking ahead:

That last bit is a puzzler, but let's remember this: Dell took the direct customer sales experience actually invented by Gateway, which peddled rocketsled PCs on the cheap to enthusiasts, with a more sophisticated direct sales model aimed at businesses. The Dell Direct model, as it was called, was married to a manufacturing operation with a very sophisticated (and profit-producing) supply chain, and often to pretty good product design, too. This is what made Dell great, and when it skimped on the design or supply chain, it suffered market share losses.

Being private means all that dough that Dell was blowing on share repurchases and dividends to pay off Wall Street can now be used for investments elsewhere. And this is a real benefit, albeit one that Big Mike & Friends have paid a premium for.

Gladden said that Dell was able to generate $22bn in cash flow over the past five years, and was expecting to be able to do similarly looking ahead. And now all of that cash will be at its own disposal. Gladden did not want to say what Dell's final debt load will be after the deal closes, but when pressed he said it would be under $20bn. (Why he didn't want to just say the number is a mystery, but welcome to dealing with private companies.)

Gladden also did not want to get into any kind of projections about what a future Dell might look like in terms of revenue splits for major product lines. The enterprise "solutions," software, and services business now has a run rate of $21bn a year, and the whole point of the Dell strategy for the past several years has been to grow this.

Dell has done $5bn in acquisitions in the past five quarters, and since Big Mike returned as CEO in 2007, it has doled out $13.7bn on acquisitions. Gladden said that Dell will work to reduce its debt, invest in product and services development, and buy other companies, but that the acquisitions would be of a "more complimentary" type than some of the expensive, big-bang deals Dell has done to add software and services.

The real issue is where Dell expects to find growth. The PC and server markets are flat or declining, depending on the projections. Dell has a slice of the services racket, but that is a tough business, too. It is growing its server business, but many suspect it is doing so by slashing prices to the bone and is not making money at it in the aggregate. Dell's tablet business is small, and so is its software business. And it doesn't plan to run its own public cloud anymore.

"We play in a $3 trillion industry," explained Gladden. "There is really no competitor who has more than 3 per cent share of that $3 trillion. If you look at that $3 trillion over the next three to four years, all of the analysts expect that there will continue to be growth in that space. IT spending is going to continue to grow. The breadth of our portfolio is obviously more than PCs now. So exposure to the data center, exposure to the key trends that are driving IT spending today – like the cloud, like virtualization, and the offerings that we bring to the market – I think give us a chance to get more than our fair share."

No one ever gets more than their fair share. The trick is redefining the market and therefore redefining what is fair. And that, presumably, is what Gladden meant. ®