Looking ahead to 'Forward' hybrid computing 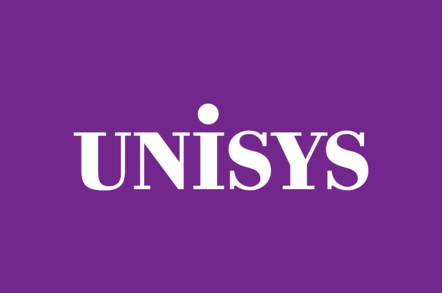 Mainframe maker Unisys has finally done it, pushing the performance of its Xeon-based mainframes in the ClearPath Libra family, which runs its MCP operating system, above the CMOS-based legacy Libra machines, and it won't be long before its Dorado family of OS 2200 mainframes are faster on Xeon iron than on native CMOS processors, allowing Unisys to get out of the processor business completely.

Unisys, which is the result of the merger of the Sperry and Burroughs mainframe makers back in the 1980s, is an expert of a sort on platform convergence. The company has taken a slow, deliberate, and careful approach to not only bringing the two families of MCP and OS 2200 machines together to share common iron (but not completely because there are architectural differences between the Libra and Dorado machines).

The company has also in delivered a line of Xeon-based machines to run Windows and then Linux that employed some of the chipsets and other partitioning technologies that were deployed in the ClearPath mainframes.

No other server maker mixing various server architectures has done anything even close to as elegant a job at converging platforms as Unisys has done. And Unisys has done it by allowing binaries running on CMOS platforms to be ported over and run unchanged on emulated CMOS iron based on Xeon chips, with pretty decent performance.

Unisys started out small and knew Moore's Law would help its emulation close the performance gap with its CMOS engines over the course of a decade or so.

At first, Unisys brought Xeon-based server nodes into the ClearPath machines, allowing them as coprocessors. Then it created a hardware emulation that made a Xeon processor look like a Unisys CMOS mainframe engine and made up for the performance differences by using the x86 iron to do sophisticated data and instruction prefetching and pretranslation to goose the oopmhs of that emulation.

But this week, with the MCP platforms and without having to move to the new "Ivy Bridge-EP" Xeon E5 v2 processors from Intel, for the first time, a Xeon-based MCP mainframe has more compute and I/O performance than a CMOS machine.

To be specific, the new Libra 8290, which is a rev on the Libra 6200 announced last October, now has an aggregate of 7,000 MIPS of processing capacity and the effective speed of an emulated single-thread motor on the box comes in at 620 MIPS.

The Libra 800 machine based on CMOS engines had 600 MIPS virtual motors and an aggregate of 5,800 MIPS of processing capacity. So that is only a 3.3 per cent bump in motor performance even if it is a 20.7 per cent increase in performance capacity across the system.

It is, however, a very big jump over the Libra 6200 series iron that came out last fall, which had a virtual MCP motor rated at 550 MIPS and an aggregate of 4,200 MIPS of performance across the system. The new Libra 8290 has 67.7 per cent more aggregate MIPS than the Libra 6200, and 12.7 per cent more single-thread performance on that virtual motor.

To accomplish this feat on exactly the same iron, Unisys worked with Intel to take the "Sandy Bridge-EP" Xeon E5-2690 engines used in the Libra line to run them in a permanent Turbo Boost mode and yet keep them in the same thermal envelope by turning off elements of the processors (such as the AVX floating point units) not used by MCP.

Unisys also created a new I/O engine for the Xeon-based boxes to boost the I/O performance and also get it above what the Libra 6200 could do. Those earlier Xeon E5-based Libra machines already blew away the Libra 800 CMOS-based mainframes when it came to I/O, as you can see in the performance chart accompanying this story. 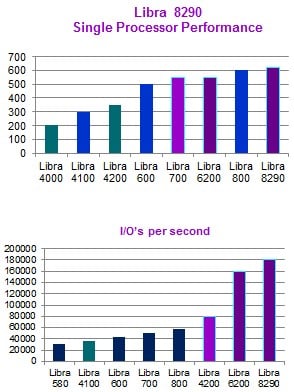 As is usually the case with any server, the new box is not really aimed at replacing its immediate predecessor, but boxes that are a few generations older and even more tapped out when it comes to CPU and I/O performance. So the Libra 8290 machine is really aimed at Libra 600 shops that have less processing capacity than Libra 700 and 6200 shops.

Libra shops that are I/O constrained but not MIPS constrained will take a hard look at the new Libra 8290 machine, which has more than four times the I/O bandwidth as the Libra 600 and more than three times that of the Libra 800.

The Libra 6200 and 8290 designs have two processor/memory modules running MCP; these are two-socket servers based on the eight-core, top-bin Xeon E5-2690 processor, which spins at 2.9GHz. Each of the two modules has 128GB of main memory, six 146GB disks, and between 10 and 16 communication ports.

Two separate I/O and specialty engine modules, which can be lashed to the machine to accelerate Java or middleware workloads as well as to do I/O work for MCP, are based on a two-socket server using eight-core E5-2680 processors (which spin at 2.7GHz) with 96GB of main memory.

The nodes are linked to each other by InfiniBand adapters that hum at 40Gb/sec – and demonstrate one of the original uses of the technology, which was supposed to be direct server node clustering and attachment of remote I/O units. Unisys got that memo.

Unisys got started on the emulated iron for MCP first, so it is further ahead on getting off CMOS chips with that part of the ClearPath base, and the OS 2200 platform has some special I/O processors and an I/O architecture that is a bit of a challenge. So it will take some time before Unisys can kick the proprietary CMOS processor habit.

Getting the Xeon-based Libra machines above the performance of CMOS-based ones was not expected until the middle of 2014, Bill Maclean, vice president of ClearPath programs within the technology, consulting, and integrations solutions group at Unisys, tells El Reg.

So Unisys is about nine months ahead of schedule on getting the venerable Burroughs mainframe performance pushed up – and without having to resort to porting the Unisys software stack to the new Xeon E5-2600 v2 processors.

On the Dorado side of the ClearPath line, which has its roots in Sperry-Univac, Maclean says to expect an incremental performance step sometime in 2014 as the company moves to the Xeon E5-2600 v2 processors to boost compute and I/O performance for OS 2200 workloads.

Then in 2015, very likely with a future "Haswell" Xeon but Unisys is making no commitments, the company will be able to make a Xeon-based Dorado that can best a CMOS one. As it the Xeon machines bypass the CMOS ones, the CMOS machines will be available for a couple of quarters and then mothballed, says Maclean. So if you want a Libra 800, you had better shake a leg.

The ideas behind the recent InfiniBand-clustered ClearPath Libra and Dorado machines are being used to create a new server line code-named "Forward" that will be designed to run Windows and Linux workloads. Unisys talked a bit about this to customers at its Universe customer event in Chicago this week, outing the product name and releasing a few tidbits about the machine.

Unisys announced a server partnership with Intel back in August, saying then that it would make machines based on Xeon E5 and Xeon E7 processors and running its s-Par hypervisor to partition the machines and give it the mainframe-class resource allocation that Unisys says other x86 hypervisors lack.

As it turns out, Unisys will be revealing its first iteration of the Forward iron in October, and the architecture, says Maclean, can scale from hundreds of server nodes and thousands of partitions, running Windows or Linux. MCP and OS 2200 will eventually be available as an option, as El Reg suspected. ®

Unisys makes a tilt at converged infrastructure and containerisation