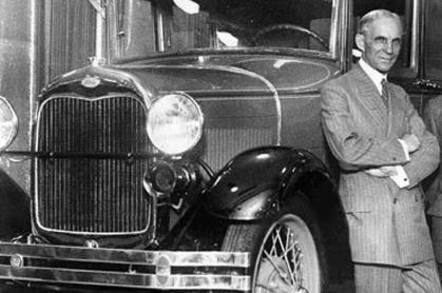 Analysis Amazon may offer a free smartphone, as it contemplates another market to get into and sterilize. Though the strategy is a bold one, it is hardly new, and its basic idea goes back to Henry Ford.

Bezos & Co are planning to launch a free smartphone, ex-Wall Street Journal reporter Amir Efrati reported on Friday, and hope to offer it directly to consumers.

The Android-based phone's pricing [Or lack of same—Ed.] would fit with the ethos that has driven Amazon from a plucky startup in an austere garage into a corporate titan that has entered numerous markets where it has crushed the competition: price far enough below your competitors to bring in punters, own as much of the device and distribution chain as possible, sit back and wait while other companies whither away, and all the time make as little profit as possible to fund your relentless expansion.

As long as the shareholders keep buying your stock, the strategy is as potent as a nuclear bomb – and just as dangerous to market incumbents.

Just as the Kindle has redefined ebook publishing through a combination of technological advancement such as its thrifty "Silk" browser and "WhisperNet" global connectivity technology, so too may the Amazon smartphone use advanced technologies, such as a rumored "3D" display. If the product exists, then Amazon's skunkworks research center Lab126 will have a hand in it – and that means hardware innovation and clever software most likely working at a low level.

This, combined with the broad swathe of multimedia content available through Amazon and the backing of the hulking Amazon Web Services cloud, gives Amazon the traits that Google has with Android: fine-grained understanding of the software, total control over the backend infrastructure, and hardware expertise.

But because Bezos also owns a content distribution platform far, far larger than Google's "Play" store, the zero-dollar phone has a better prospect of earning back the $200-odd dollars its bill of materials is likely to add up to.

It's a strategy that goes all the way back to Henry Ford, who used a combination of good wages for employees and careful pricing of the first automobiles to make cars available to as many people as possible.

We may live in different economic times than did Ford, but Bezos's decision to offer the phone for free and then make money in after-sales makes him Ford's spiritual successor.

Like Ford, Bezos has control over a broad battle-tested manufacturing network. He also has a huge crowd of potential customers to draw on in the form of Amazon's millions of subscribers, as did Ford with his well-paid workers. But what Ford didn't own – the fuel in gas stations, and the distribution infrastructure for his cars – Bezos does in the form of the goods and streaming media services hosted on Amazon, and the physical logistics network he has built up through partnerships and more recently through the Amazon-operated grocery delivery service.

With a free phone, Bezos could quickly create a significant pool of users for that device, and then do what Amazon does best: lower prices to weaken competition while using any means necessary to minimize profits and pour all the cash into relentless tech advancement.

After all, if Ford had also owned Standard Oil, he may have given his cars away for free. ®