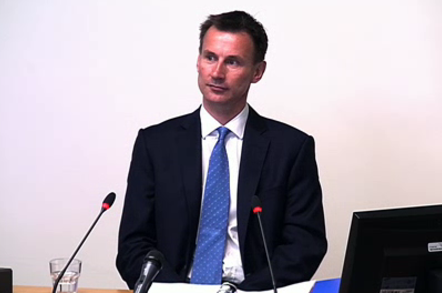 Health Secretary Jeremy Hunt confirmed this week that Whitehall had slapped a further £240m on the pile of taxpayer cash needed for his grand plan to store and process medical records digitally.

That means the government has now set aside £500m – which is expected to be matched by local health and care trusts to make up a total of £1bn – to make the NHS "paperless" by 2018.

In May this year, the Department of Health said it wanted to tear up the NHS's clumsy system of printed prescriptions – and instead use "unique barcodes" to dish out medication straight to the poorly. The government contributed £260m to that plan.

Under those proposals, paperwork listing medicines and drugs will be sent directly from doctors' surgeries to pharmacies, bypassing the need for ill Brits to pick up the printed slips and take them to a suitable shop to process.

Funding for the plan is undergoing a second-stage evaluation, with successful bidders for a piece of the £1bn expected to be announced at the end of October.

But the plan will rely heavily on robust IT systems crunching highly personal patient data that has already alarmed privacy advocates who are concerned about that information being in the hands of corporations.

The £240m added to the pot this week is intended, the DoH said, to "help deliver the government’s commitment to allow everyone to book GP appointments and order repeat prescriptions online by March 2015, as well as give everyone who wants it online access to their GP record."

It added: "One of the key things the money will be spent on will be systems which allow hospitals, GP surgeries and out of hours doctors to share access to patients’ electronic records."

Are you SURE you want to opt out?

But concerns remain about what will happen, under the new plan, to patients who have previously opted out of having their data shared within the NHS now that more and more information is to be stored digitally.

Earlier this year, Hunt insisted to The Register that 750,000 patients throughout England, who had already opted out of having their data spread around, would be automatically protected.

"We're not going to cancel the opting out that's already happened. There may be a process of recontacting people to explain the new arrangements and that's a detail which we'll work through in operational terms. But we will respect people who have already said they wish to opt out of NHS sharing," the cabinet minister told your correspondent.

This autumn, the newly formed Health and Social Care Information Centre (HSCIC) will begin the laborious task of collecting patient data from GP practices and connecting it with hospital info it already stores.

NHS England stated late last month that the following information would be collated:

Your date of birth, full postcode, NHS Number and gender rather than your name will be used to link your records in a secure system, managed by the HSCIC. Once this information has been linked a new record will be created. This new record will not contain information that identifies you. The type of information shared, and how it is shared, is controlled by law and strict confidentiality rules.

It also makes it clear that it is the responsibility of GP practices to update records where a patient explicitly states that their personal data should not be shared.

As for the 750,000 people who had opted out of having their details stored in the Summary Care Records, the NHS now says that those individuals also need to talk to their GP:

There are important differences between allowing the NHS to use your information for planning and research and the Summary Care Record (SCR). The SCR is used by health professionals to provide you with care. It would be wrong for us to assume that because you have chosen not to have a SCR that this means you also wish to stop the use of your information being used to improve health services.

So much for Hunt's promise of respecting those patients who had previously declined to let their data be stored by the NHS.

The onus, then, is on patients to visit their GP practices pretty sharpish if they object to having their records stored digitally. Here's the NHS's own advice on what you need to do:

If you do not want information that identifies you from being shared outside your GP practice, talk to a member of staff at your practice. They will make a note of this in your medical record. This will prevent your information being used other than where necessary by law, such as in case of a public health emergency. You will also be able to restrict the use of information held by other places you receive care from. However, this will not affect the care you receive.

You can change your mind at any time and as many times as you wish. Just speak to your GP practice and ask them to record your wishes. For example, if you state that you are happy for your information to be used then you later decide that you object, tell your GP and the HSCIC will then ensure that any information they have from your GP practice and that could identify you is removed.

What remains unclear is how this opt-out system will be managed: online or more paperwork? If it is stored digitally – which is likely – then who will have access to the database that lists the names of people who object to NHS sharing their information across the health service?

Those among you who are nervous about Hunt's data-sharing plans should get in touch about your experiences of telling your GPs that you object to the information being stored in this way. The Register would be interested to know how well this system of opting-out is actually working. We guarantee your anonymity. ®

Health Secretary makes a mint. Good for him, right?

Bigwigs report lots of progress in the cash-flinging department

Jeremy Hunt: Telcos must block teens from sexting each other

I was going to sext but then I remembered the government ban. So I didn't!

Gag order on MP's flirtation with contempt of court lifted