Microsoft, Nokia and the sound of colliding garbage trucks

$7.1bn... quite a hefty price tag for joined-up marketing 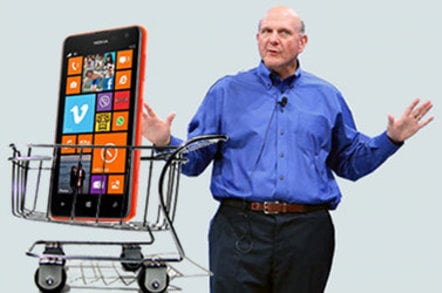 Opinion History, it is said, doesn't repeat itself – there are merely echoes through time. Listening to Microsoft's $7.1bn purchase of Nokia's phone and services, you'd have certainly heard an echo – the distant grinding noise of two colliding garbage trucks reverberating down the years.

The phrase "the sound of two garbage trucks colliding" was coined by Sun Microsystems' co-founder and chief executive Scott McNealy to describe the merger of rivals Hewlett-Packard and Compaq.

McNealy used it to describe the unseemly act of two elderly corporate tech giants with outdated practices and ageing products attempting a merger.

Cruelly, the phrase was turned back on McNealy when his struggling Sun chucked $4.1bn at StorageTek, a giant marooned on a tape storage island as the world went digital.

With Microsoft and Nokia, we again hear the sound of rending metal. Nokia and Microsoft are huge operations – with roughly 32,000 and 100,000 staffers respectively. And neither is particularly new or adept at changing their business practices and structures.

Nokia is cast as StorageTek in this latest merger. Once the world's largest maker of handsets, Nokia's lost market share and money as the world moved on. Microsoft is like Sun: tied to a once thriving business - PCs - that market is getting left behind as the world moves on, adopting tablets and smartphones instead. It has a pile of cash at hand to buy its way into a new chapter.

But lo! The sound of dump trucks reverberates across the horizon.

Yet Nokia is no silver bullet for Microsoft on phones and tablets. Rather, it's a big, formless lump of metal.

Lost in the big-picture headlines of Tuesday was this financial gem: Microsoft is extending Nokia a $1.97bn (€1.5bn) line in prime financing delivered in three blocks that Nokia will repay, if (or when) the deal closes as expected in the first quarter of 2014. In other words, Microsoft is offering to help keep Nokia's operations funded for the remainder of 2013, a fact that raises questions about whether alarm bells were ringing inside Nokia and Microsoft over the former's fiscal health.

Nokia's turnaround - and Microsoft's plans for it

Nokia is lagging behind on chief executive Stephen Elop's Windows Phone turnaround plan: in its most recent quarter, Nokia lost $150m, as phone and device sales were down – substantially. The company had €4.07bn ($5.34bn) in cash and other liquid assets that it could draw upon - but this was down, too, from €4.36bn ($5.73bn) in January.

Nokia, meanwhile, was often reported to be open to shipping a phone running Android – the market's current number one mobile OS. A distracted or weakened Nokia would have been a disaster for Microsoft, given that Nokia makes more than 80 per cent of Windows Phones sold.

Reports today say the deal with Microsoft was agreed quickly during the summer. Incoming Microsoft board member ValueAct was not apprised of the deal, meaning Nokia isn't a VC-authored mobile turn-around.

On a conference call on Tuesday with Wall Street, Microsoft chief executive Steve Ballmer made it clear that he expects Nokia will continue to remain the sole Microsoft Windows Phone supplier for a very long time, based on today's market-share numbers.

"I don't foresee that changing dramatically in the short run. But if the market grows, I expect to see additional percentages, if you will, go to our OEMs, but it's premature to predict today," Ballmer said.

So was this a rescue deal? The rationale for Microsoft taking ownership of Nokia makes little sense based on Steve Ballmer's own justifications for Wall Street on Tuesday.

Asked what Microsoft would change that wasn't possible before owning Nokia, Ballmer said: "Number one, we talked about one brand and a unified voice to the market."