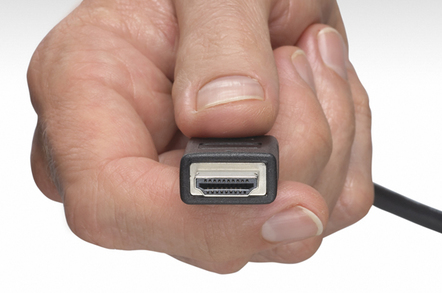 Eleven years on from the commencement of work on the first version of the telly connectivity standard, the minds behind the High Definition Multimedia Interface – HDMI to you and me – have taken the wraps off release 2.0 a year later than originally anticipated.

The bus's clock rate rises from 165MHz in HDMI and 340MHz in HDMI 1.3 to 600MHz, raising the per-channel TMDS (Transition Minimised Differential Signaling) rate from 1.65Gb/s and 3.4Gb/s to 6Gbps. Like HDMI 1.4, 2.0 supports 3D video, is able to host Ethernet networking traffic and has an audio return channel.

The new spec makes room for 32 separate audio channels, adds support for dynamic lip-syncing and extends the range of device control commands that HDMI’s CEC (Consumer Electronics Control) mechanism can support. CEC routes remote control commands from one device to another, allowing, say, your TV remote to operate your Blu-ray player or your DVR.

HDMI 2.0 is compatible with previous versions of the standard, so new kit will connect to old. Cables remain the same, as do the connectors, but you’ll need Cat 2 - aka High Speed - HDMI cables to take advantage of the higher bandwidth, the HDMI Forum said.

The Forum first announced that work had begun on HDMI 2.0 back in January 2012. It promised the specification would be complete and ready to publish by the end of the year. That deadline missed, this year the Forum promised a first-half release, but that has clearly slipped back to the second half of 2013.

No matter: it’s not as if there’s a surfeit of 4K tellies and players that can’t be sold until HDMI 2.0 is complete. That said, the timing of the new specification is appropriate: the IFA show opens this week in Berlin and is expected to play host to the new 4K TVs that telly-makers are expected to bring to Europe in 2014 as 4K broadcasts begin – probably with the 2014 World Cup contest. ®