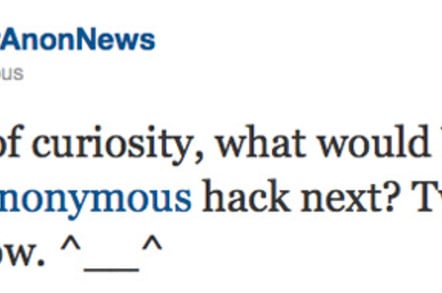 Following the Syrian Electronic Army's (SEA's) attack on a Melbourne IT reseller which resulted in the temporary compromise of domain name records for targets as diverse as The New York Times and Twitter, a group claiming association with Anonymous now says it has compromised SEA databases and servers.

As first reported here (in French with NSFW images) and here by Brian Krebs, the attackers say they have compromised SEA servers, obtained members' names along with user IDs and passwords, and have copied gigabytes of SEA data.

The Twitter stream operated under the handle @blackplans includes screenshots which the operator of that account describes as showing the SEA's Parallels server, blog logins, and user credentials.

In an online chat with The Register, an “entity or person associated with Anonymous” confirmed the accuracy of the Krebs article, as well as the scale of the compromised data.

The @blackplans associate told El Reg Anonymous had already d0xed – that is, de-anoymised – “five core members” of the SEA.

While the SEA's Twitter account – @Official_SEA16 – has denied that it's been compromised and calls the screenshots fakes, the same signature is also used on a complaint posted at Pastebin, asserting that his story and others put individuals at risk of being “tracked and killed by the FSA” (Free Syrian Army).

The @blackplans associate said a group of individuals determined to attempt a breach on the SEA on the basis that the SEA works on behalf of the Syrian government. Performing the attack turned out to be relatively easy, he or she claimed. While unwilling to divulge specifics of techniques, “they left trails, nicknames, email addresses, modus operandi” and were therefore “easy to trace”.

Moreover, “they reuse passwords as well” – something that would considerably simplify breaching systems. Active members of the SEA are not restricted to Syria, @blackplans claimed, but also in Kuwait, Saudi Arabia and Indonesia. The breach also gave access to an account called @eagles_syrian which @blackplans described as associated with the SEA.

@Blackplans said it was decided not to leak all of the data obtained, to avoid the risk that some individuals in the databases would be killed.

Since Brian Krebs' article was published, leaks against the SEA include copies of banking scam phishing e-mails allegedly held in its systems. ®

First the Rise of the Machines, now this: UK military's Exercise Information Warrior

Comment From drones to smart warships. Well, sort of